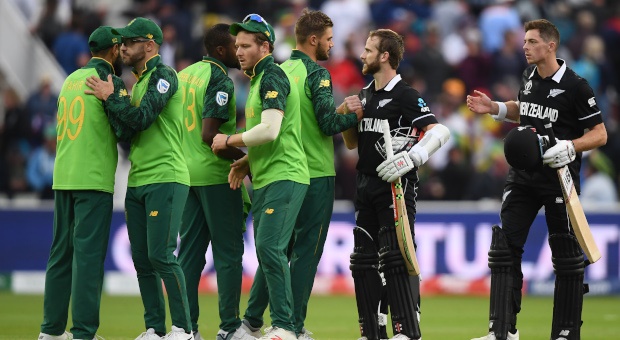 Cape Town – Well, there’s a first time for everything.

In a sure sign of just how odious their World Cup 2019 has been, South Africa find themselves in the novel position of having to stick around for THREE effectively dead-rubber further fixtures at the tournament, even before the knockout phase they won’t have any part in.

Their campaign battleplan to all intents and purposes crumpled and lobbed into the bin, they must loiter after the Lord Mayor’s Show – at least as it affects their own relevance – to play Pakistan, Sri Lanka and Australia before earliest possibilities of jetting home from around July 7 … still some 18 days away.

Anyone keen to try some outlandish calculations for how they might yet crack the semi-finals?

Best of luck, if so.

No, they simply must be goners, given that the very maximum they can get to now is nine log points from their current, putrid three from six tussles: Wednesday’s latest SA-slayers, New Zealand, have already reached that tally from one less

match and three others are one triumph away from reaching or passing that mark – including India with only four games played to this point.

Pure logic also tells you that it is massively unlikely a team banking four wins out of nine in a 10-nation tournament could possibly crack the top four.

Just by the way, can anyone even see Faf du Plessis’s thoroughly spooked, worryingly featureless troops romping to a trio of “hangover” triumphs from here, even if that was going to provide some kind of miraculous lifeline?

Here’s another sobering thought for anyone harbouring irrational, lingering optimism about the Proteas sneaking the cut: they have to wait until Sunday for their game seven against the Pakistanis at Lord’s, and before that they could officially be put out of their misery, or at least be pushed that much nearer to it.

That is because Australia should beat Bangladesh on Thursday, England knock over the ‘Lankans on Friday and – perhaps likeliest of all? – India whip Afghanistan on Saturday.

In at least the first two clashes listed, the likelihood of the favourites prevailing would power them to 10 points each and then quite indisputably out of reach of South Africa.

So take it virtually for granted that the Proteas (net run rate still mired in negative equity, too) are playing only to salvage crumbs of pride for the remainder of their stay in England, even if the occasional Archimedes raises his hand in technical data-based protest.

Sadly these wilting Proteas may simply have an ongoing role as kingmakers of sorts for others -- although some English-based analysts are already fearful that the host team, plus India, New Zealand and Australia may pull away from a swollen group of rats and mice rather sooner than neutrals would find desirable.

Never before have South Africa been rendered so redundant so quickly at a World Cup.

The Proteas, for all their variety of hoodoos in this tournament – those spirits whistled teasingly around their ears at Edgbaston on Wednesday, reflected in a string of shambolic moments toward the end of the Black Caps duel – have only failed on one prior occasion in their now eight CWCs to make the knockout-phase cut.

Ironically it was on their own turf in 2003, although at least in that instance they didn’t have any further preliminary games left to negotiate when they exited: by ending fourth in one of two seven-team pools, they failed to qualify for the Super Sixes (though they’d still won three of six games, mind) and were able to simply disperse quietly to their nearby homes.

They’re not so lucky at this World Cup, and the galling thing is that they can’t really shake up their XI that significantly to turn thoughts toward a concerted rebuild: some of their “bench” personnel aren’t exactly young bucks and in at least one case -- JP Duminy -- quit the 50-overs environment after CWC 2019 anyway.

So to a certain extent we’ll only see a Dad’s Army lumbering on, if you like.

Forty-year-old strike-spinner Imran Tahir, who gave his all (as is pretty much customary) in the bid to arrest New Zealand’s charge to the deflating victory, is another who has confirmed his ODI retirement post-World Cup, so it makes sense to empower Tabraiz Shamsi a lot more in the remaining three outings.

But any more meaningful shaking of the resources bag in this format will have to be put on hold until the next domestic summer.

“Individually we’d have liked to take on more responsibility,” a crestfallen Du Plessis admitted in his immediate, on-field post mortem, clearly referring not just to the latest setback but most other SA matches at the event thus far.

His statement is backed up by the fact that Proteas players are so conspicuously absent from the main, glamour statistical categories up to this point.

Most runs? No South African in the current top 10.

Most sixes? Rassie van der Dussen, one increasingly shining beacon, comes in at eighth, albeit that his five are a long way off Eoin Morgan’s trend-setting 22.

Most wickets? Chris Morris, helped by a credible, resourceful showing on Wednesday, cranks up a few notches, though only as high as seventh (with nine).

Where are our country’s truly special cricketers, though?

Perhaps that is a question for another day.

We live in a world where facts and fiction get blurred
In times of uncertainty you need journalism you can trust. For only R75 per month, you have access to a world of in-depth analyses, investigative journalism, top opinions and a range of features. Journalism strengthens democracy. Invest in the future today.
Subscribe to News24
Related Links
Faf: Phantom nick not what cost us the match
Faf: We understand the anger from SA fans
As it happened: Proteas fall to heartbreaking Black Caps loss
Next on Sport24
Petition to have 2019 CWC shared rejected