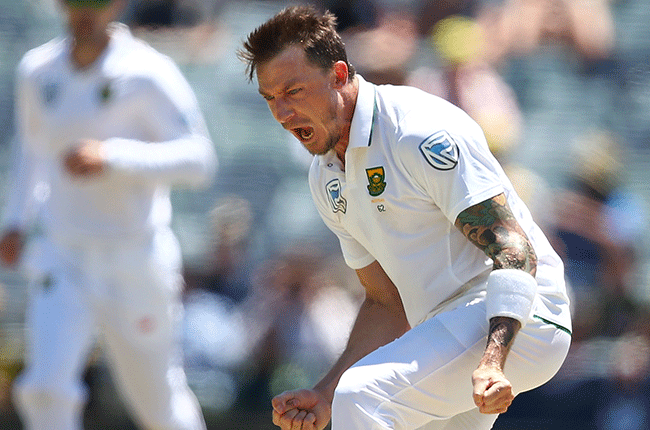 Despite his own legendary status, Dale Steyn has humbly suggested that comparisons between him and James Anderson be shelved.

The evergreen, 38-year-old Englishman entrenched his status as one of the greatest fast bowlers of all time with a superb supporting performance in his team's excellent victory in the first Test against India in Chennai earlier in the week.

Anderson took 3/17 in the hosts' second innings, notably producing an astounding over of reverse swing to dismiss Shubman Gill and Anjinkya Rahane within three deliveries of each other.

Joe Root, his captain, would later say it was the greatest over he'd experienced in his career to date.

Anderson's exploits prompted the specialist platform CricTracker to do a comparison with Steyn in terms of their respective numbers when playing in Asia.

But the 37-year-old, affectionately known as the Phalaborwa Express, was having none of it.

"The only comparison required is that Jimmy is still going and I’m watching from my 20/20 sofa," Steyn wrote on Twitter.

"He’s a legend and seems to be getting better with age."

The only comparison required is that Jimmy is still going and I’m watching from my 20/20 sofa.
He’s a legend and seems to be getting better with age ??

Ironically, the Proteas kingpin, South Africa's leading wicket-taker in Tests with 439 in 93 matches, boasts superior numbers - 92 scalps at an average of 24.11 and a strike rate of 42.

Anderson, whose inspiring longevity means he's the fourth-highest scalper in Test history with 611 victims, has taken 71 wickets at 27.94 and a strike rate of 64.

However, according to Steyn, there's no debate.

We live in a world where facts and fiction get blurred
In times of uncertainty you need journalism you can trust. For only R75 per month, you have access to a world of in-depth analyses, investigative journalism, top opinions and a range of features. Journalism strengthens democracy. Invest in the future today.
Subscribe to News24
Related Links
David Miller: Raw Proteas T20 squad is hardly a bad thing
Bookies have Pakistan as comfortable T20 favourites against Proteas
Thin line between Proteas- Pakistan T20 series being valuable or meaningless
Next on Sport24
Karunaratne keeps Sri Lanka in the runs after Bangladesh make 541