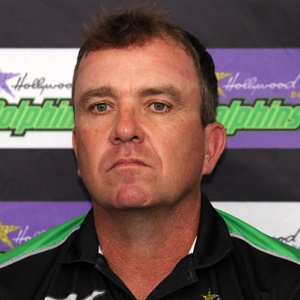 Durban - Dolphins coach Grant Morgan and his assistant coach Imraan Khan have both accepted contract extensions following the conclusion of the recent domestic season which will keep them at the franchise until at least the end of the 2019/20 season.

Both coaches played pivotal roles in the Dolphins sharing the One Day Cup last season as well as making the RAM SLAM T20 Challenge final, and Morgan is excited about the prospect of taking his team to the next level.

"My track record suggests that given time I can succeed," the coach said.

"At every place that I have coached I always try and connect with the people there and get the best results from them, not only for the team and the union, but for the people.

"So, when the offer came up to continue what I am doing here, I was quick to take it."

Having shown a solid progression over the two seasons that he has been at the helm of the Dolphins, Morgan feels that they are on the edge of his 'glory era'.

"The blue print to success is there and although we have been good, we still have massive room for improvement," he said.

"We have seen through the success of KZN Inland, and now the coastal side coming to the party this season, we are on the right track.

"Creating a winning culture at the bottom will filter through the ranks and the Africa T20 Cup and 3 Day Cup success pushes the players in the Dolphins set up."

Morgan's assistant coach Imraan Khan, who went straight into the position following his retirement from the game, is excited about the prospect of two more years under Morgan's leadership.

"I think Morgs and I have worked well together," Khan said.

"It helped that we had a bit of experience working together beforehand in the KZN Inland set up.

"I have thoroughly enjoyed my time with Morgs and we have been relatively successful so far, but the challenge is to replicate and improve on what has happened in the past.

We live in a world where facts and fiction get blurred
In times of uncertainty you need journalism you can trust. For only R75 per month, you have access to a world of in-depth analyses, investigative journalism, top opinions and a range of features. Journalism strengthens democracy. Invest in the future today.
Subscribe to News24
Related Links
Mark Waugh slams 'selfish' India over day-night Test snub
ICC to scrap coin toss in Test cricket?
Disgraced Warner to play Sydney club cricket
Next on Sport24
Unfailing Van der Dussen a calming factor for SA’s series climax