Wood: I woke up feeling ready to charge 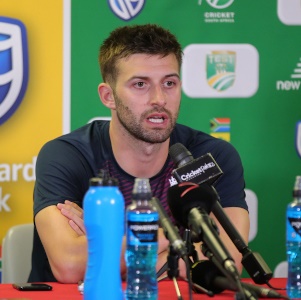 Cape Town - England's gamechanger Mark Wood admitted he was not even in line to play the fourth Test against South Africa until he woke up raring to go on the morning of the match.

Wood was on fire as his three for 21 reduced South Africa to 88 for six - a pitiful response to England's first-innings total of 400 and one that should see the tourists complete a 3-1 series win in the coming days.

The Durham quick had played his role in that part of the equation too, putting on a ground record last-wicket stand of 82 alongside Stuart Broad, the tail-end duo sharing seven sixes along the way.

Wood was part of the winning formula from Port Elizabeth but England were erring on the side of caution with a player who has a long history of injuries and experienced pain muscular soreness after what was his first Test appearance in 11 months.

Many expected Jofra Archer, the only other player capable of matching Wood's propensity for extreme pace, to take his place but things changed just as the XI was being finalised.

"Probably until the morning of game I wasn't in the team," Wood admitted.

"Jofra was definitely going to play, two days out he looked really good in the nets, and it was probably me who was going to miss out because I was just stiff and sore everywhere.

"Then it was a role reversal, on the morning of the game he was still feeling his elbow and I felt good enough to play. I spoke to the captain and coach and said, 'if you want me, I'm ready to go'. I felt good in the warm-ups and I said, 'I'm not quite sure how it's going to go but I'm ready to charge in for you one more time'.

"I couldn't guarantee them I could bowl 90mph in my fourth and fifth spell but I'm glad I made that decision and it's going well."

Joe Root must be pleased he took up the offer, not only for the wickets of Pieter Malan, Temba Bavuma and nightwatchman Anrich Nortje, but also for the vital late runs he and Broad provided.

The pair swung uproariously and needed just 50 balls to take the score from 318 to 400, sapping the Proteas' morale. Broad was last man out for 43, with Wood unbeaten on 35 with three sixes and two fours.

Wood also cleared the ropes five times in the previous Test and admitted it was the help of those nearest and dearest to him during his most recent rehabilitation that had helped him learn to master the pace and bounce of South African pitches.

"I did a lot of work behind the scenes at Newcastle's indoor centre. Sometimes with my dad Derek, sometimes with my wife Sarah, just feeding me the balls on the bowling machine," he said.

"My wife would be laughing telling me to get in line, she got me a couple of times. My dad is particularly spicy as well. The worst is (head coach) Chris Silverwood though, because he laughs when he hits you.

"You'd think the coach would be more supportive but he's still got a fast bowler in him I think."

We live in a world where facts and fiction get blurred
In times of uncertainty you need journalism you can trust. For only R75 per month, you have access to a world of in-depth analyses, investigative journalism, top opinions and a range of features. Journalism strengthens democracy. Invest in the future today.
Subscribe to News24
Related Links
SA U19s book quarter-final spot with DLS win over UAE
Proteas speedster Nortje halts England progress
Lee, Wolvaardt blast Proteas to victory in Auckland
Next on Sport24
There is no limit to what this England team can do - Morgan