Five things we learned from the 1st England-West Indies Test 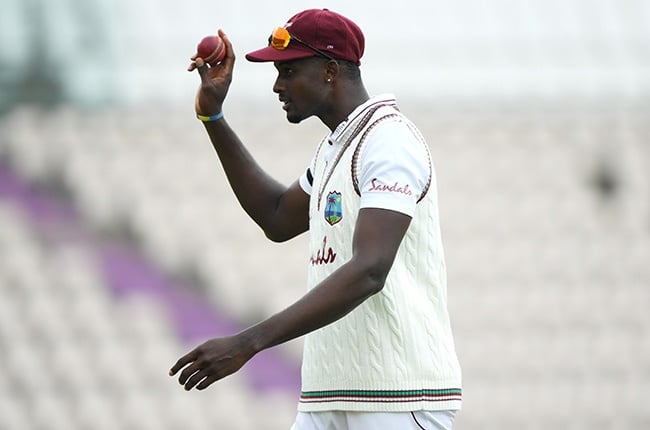 West Indies captain Jason Holder salutes the dressing room as he leaves the field after taking six wickets during day two of the first Test against England at The Ageas Bowl in Southampton on 9 July 2020.
Stu Forster/Getty Images for ECB

International cricket returned from lockdown in style as the West Indies beat England by four wickets in the first Test at Southampton.

Here follows a look at five key points from a match that took place against the backdrop of the coronavirus pandemic:

West Indies captain Jason Holder led from the front by taking a Test-best 6-42 in England's lowly first-innings 204 and the world's top-ranked all-rounder twice dismissed home counterpart Ben Stokes in this match as well.

He also showed plenty of tactical skill in the way he deployed his bowlers and had Stokes caught by the finer of two gully fielders he had cleverly deployed for the England talisman to spark a collapse that saw the hosts lose five wickets for 30 runs on Saturday.

England wicketkeeper Jos Buttler's run of low scores in Test cricket continued with innings of 35 and nine at Southampton.

He was recalled to the Test side in one of Ed Smith's first acts as national selector in the hope he could transfer his one-day batting form into the five-day game.

But Buttler is now averaging a mediocre 21.38 from his last 11 Tests and the World Cup-winner also dropped Jermaine Blackwood on 20 before the West Indies batsman made a match-clinching 95 on Sunday.

England have Ben Foakes in their squad, with the Surrey wicketkeeper - arguably a better gloveman than Buttler - boasting a Test batting average of 41.30.

Foakes has also made one Test hundred in five matches compared to Buttler's one in 42.

The 33-year-old is in the England side as a specialist batsman but his dismissal for 29 on the fourth day means he has gone eight Test innings without reaching 40.

One of either Denly or Zak Crawley, who made 76 on Saturday, is set to make way when captain Joe Root returns for the second Test.

And it increasingly looks like Denly will be dropped with his innings on Saturday, which ended when he tamely chipped off-spinner Roston Chase to short midwicket, another example of an infuriating habit of throwing his wicket away after a sound start.

Spectators are barred from this three-match series as a health measure to combat COVID-19.

That had raised fears players might not be able to replicate their usual levels of intensity but there was no lack of effort or skill, even though England stand-in skipper Ben Stokes admitted the atmosphere was "strange".

This was an awkward match for English officials Richard Illingworth and Richard Kettleborough after the International Cricket Council relaxed rules on home umpires standing in Tests because of virus restrictions.

At one stage the pair saw five successive decisions overturned on review in favour of the West Indies.

The ICC have given teams an additional review each innings of this series to compensate for the lack of neutral officials and this Test was a reminder that umpires, just as much as players, need match time before entering the international arena.

We live in a world where facts and fiction get blurred
In times of uncertainty you need journalism you can trust. For only R75 per month, you have access to a world of in-depth analyses, investigative journalism, top opinions and a range of features. Journalism strengthens democracy. Invest in the future today.
Subscribe to News24
Related Links
Sachin Tendulkar slams loopholes in umpire referral system
Captain Ben Stokes has no regrets after first Test defeat against Windies
Jason Holder hails Shannon Gabriel's 'massive heart' as Windies beat England
Next on Sport24
Afridi leads Pakistan's victory over Zimbabwe despite Taylor's hundred