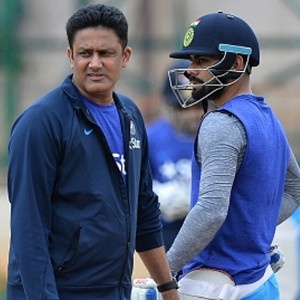 London - India captain Virat Kohli won the toss and elected to field against arch-rivals Pakistan in the Champions Trophy final at The Oval on Sunday.

Title-holders India, who thrashed Pakistan by 124 runs in their opening group match, were unchanged from the side that hammered Bangladesh by nine wickets in Thursday's semi-final at Birmingham's Edgbaston.

But Pakistan made one change, with the fit-again Mohammad Amir, who missed Wednesday's impressive eight-wicket semi-final win over previously unbeaten tournament hosts England with a back spasm, returning.

India's lone loss so far in this tournament, featuring the world's top eight ODI nations, was at The Oval when they suffered a surprise seven-wicket defeat by Sri Lanka on June 8.

Pakistan, however, have lost all three of their previous matches against India in the knockout stages of International Cricket Council events.

We live in a world where facts and fiction get blurred
In times of uncertainty you need journalism you can trust. For only R75 per month, you have access to a world of in-depth analyses, investigative journalism, top opinions and a range of features. Journalism strengthens democracy. Invest in the future today.
Subscribe to News24
Related Links
Cricket's biggest match to decide Champions Trophy
Five-wicket Cremer sparks Zimbabwe win
Kohli simply the best - AB de Villiers
Next on Sport24
Cricket's biggest match to decide Champions Trophy