Indore - Mohammed Shami took four wickets as India crushed Bangladesh by an innings and 130 runs inside three days of the opening Test on Saturday.

Bangladesh were bowled out for 213 in the final session in Indore after their gamble to bat first after winning the toss backfired badly against the Indian pace attack.

Shami's fellow fast bowlers Umesh Yadav and Ishant Sharma shared three wickets between them after India declared their first innings on 493 for six, with a lead of 343 runs.

"The captain gave me the freedom to bowl the way I wanted and it went well," Shami said after the game. "Having Umesh and Ishant alongside me is a plus."

Mushfiqur, who scored 43 in Bangladesh's 150 in the first innings, finally became one of three wickets taken by off-spinner Ravichandran Ashwin.

Ashwin, who reached 250 wickets in home Tests in the first innings, got last man Ebadat Hossain for one to spark India's victory celebrations.

India were dominant with the bat and ball against Bangladesh.

Opening batsman Mayank Agarwal played a key part in the win with his 243 - his second double century in four Tests - as India amassed 407 runs on the second day.

The bowlers kept up the pressure when Bangladesh started their second innings.

Yadav drew first blood, taking Imrul Kayes for six on a ball that curved into the left-hander and rattled the leg stump.

Ishant Sharma got Shadman Islam for six in the next over. Shami then trapped skipper Mominul Haque lbw for seven.

Mominul was given not out by the on-field umpire but India skipper Virat Kohli successfully reviewed the decision with replays showing the ball would have hit leg stump.

Bangladesh skipper Mominul said the batting of Mushfiqur and bowling of Abu Jayed had been the only "positives" in the disappointing defeat.

Abu Jayed stood out with his four wickets in the Indian innings but got little support from his teammates.

The second and final match is a day-night clash, with India hosting its first-ever pink-ball Test at Kolkata's Eden Gardens from November 22.

Another excellent display from India's bowlers and it's Mohammed Shami who has starred with figures of 4/31, while Ravichandran Ashwin took three.

We live in a world where facts and fiction get blurred
In times of uncertainty you need journalism you can trust. For only R75 per month, you have access to a world of in-depth analyses, investigative journalism, top opinions and a range of features. Journalism strengthens democracy. Invest in the future today.
Subscribe to News24
Related Links
Biff saga: Politburo 1 Cricket Public 0?
Red-hot Agarwal delighted to cash in on strong form
Stokes doesn't want to captain England
Next on Sport24
LIVE | Kings XI Punjab v Delhi Capitals 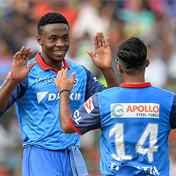