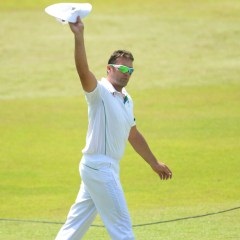 Durban - Sitting in his post-match press conference where the subject was his six-wicket haul for the day, Dale Steyn's voice suddenly began to waver when the topic of Jacques Kallis came up.

Steyn had returned figures of 6/100 to help dismiss India for 334 in the second and final Test at Kingsmead on Friday in what would be the last match in the purest format of the game for Kallis.

“When he mentioned it (retiring) - I almost had a tear in my eye - I realised he was being serious,” said Steyn, struggling to get the words out.

“I'm quite close to him and he'd always joked around with things like that.

"I kind of knew in the back of my mind, but it's terribly sad.”

The Boxing Day Test would be the last for Kallis. who announced his retirement from the longest format of the game on Wednesday.

Steyn said he had known of Kallis's intentions for a while but did not take him seriously.

“Watching him now in the changeroom, he's more talkative than he's ever been.

“I think he's just enjoying his last moments of being in the dressing room wearing the whites.

“He'll still be around for the ODIs, but this format is what's made him a hero to South Africa. But he's a hero for South Africa in all formats anyway.”

With the match interestingly poised, the Proteas would go all out for the win according to Steyn.

“I really hope he enjoys his last couple days and we'll do everything we can to try and help get a victory in his last Test.

“We stand a chance to win this match, especially for Jacques.”

Steyn said Kallis himself had no intentions of going out of the game with a draw.

“He had a word with us this morning, and he said he didn't want to come and play his last Test match in Durban for the game to just fizzle out in a draw.

Kallis earlier in the day had taken his 200th catch in Test cricket as he notched up another milestone.

JP Duminy found the edge of Ravindra Jadeja in the 108th over of India's first innings, and Kallis took the catch at first slip diving forward.

Kallis will end his career at the ground where he made his debut for South Africa in 1995 against England. It brings to an end a career of 166 matches for the all-rounder where he has averaged over 55 with the bat with 44 centuries and 58 half-centuries.

We live in a world where facts and fiction get blurred
In times of uncertainty you need journalism you can trust. For only R75 per month, you have access to a world of in-depth analyses, investigative journalism, top opinions and a range of features. Journalism strengthens democracy. Invest in the future today.
Subscribe to News24
Related Links
Aussies wrestle back control
Steyn: Among my best ever
Next on Sport24
Kallis: Records never mattered