Proteas batter Zubayr Hamza on his way to 56 against the Netherlands.
Christiaan Kotze/Gallo Images

International sport in Southern Africa effectively ground to a halt on Saturday as a result of travel bans caused by the new Omicron coronavirus variant.

The Joburg Open tournament, part of the new DP World Tour, was the only major event played - and that was severely curtailed.

A cricket series between South Africa and the Netherlands was postponed after a rain-ruined first game on Friday, while the International Cricket Council's (ICC) Women's World Cup qualifying tournament in Zimbabwe was abandoned.

Four matches in the United Rugby Championship were postponed with two teams from Wales, one from Ireland and one from Italy all trying to get home as soon as possible.

Travel to and from southern Africa was thrown into chaos when the British government announced on Thursday that South Africa and other southern Africa nations had been returned to Britain's red list following the discovery of the Omicron B.1.1.529 variant.

Other European countries and several other nations, including the United States and Canada, followed in blocking travel from the region. This caused a scramble by sports teams and individuals to get home ahead of being forced into mandatory quarantine - or simply to secure a flight home.

The Netherlands were due to play the second of three one-day internationals (ODIs) in Centurion on Sunday but the last two matches were postponed despite the tourists being unable to get on flights out of South Africa.

A joint statement from the South African and Netherlands cricket boards said the decision not to play the games came "as a result of mounting anxiety and concern on the side of the visiting team around travel bans and restrictions on flights".

The Netherlands team will remain in a bio-secure environment in a hotel until they are able to get out of the country. 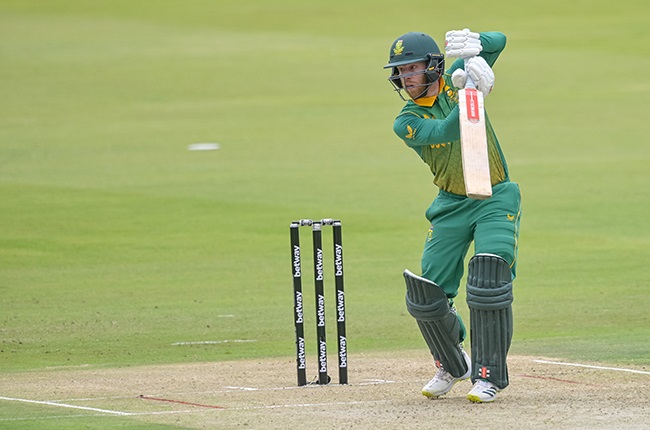 Proteas batter Kyle Verreynne on his way to 95 against the Netherlands. (Christiaan Kotze/Gallo Images)
Sport24

The fate of a planned full tour of South Africa by India remained uncertain. The Indian team are due to depart for South Africa on 8 or 9 December for a tour which includes three Tests, three ODIs and four T20 internationals.

As of Saturday, India had not been added to the list of countries blocking travel to and from South Africa.

There were no immediate plans to curtail a series being played by the India 'A' team, who completed the first of three four-day games against South Africa 'A' in Bloemfontein on Friday.

Two more matches, also due to be played in Bloemfontein, are expected to go ahead in an area some distance from Gauteng, where the majority of new Covid cases have been discovered.

The ICC called off the women's qualifying tournament at the preliminary league stage and announced that the three highest teams in the ICC rankings - Bangladesh, Pakistan and West Indies - would go forward to the 2022 Women's World Cup in New Zealand.

There were numerous withdrawals from the Joburg Open following Britain's announcement on Thursday. A total of 26 withdrawals or retirements were registered before Saturday's third round.

The tournament was reduced to three rounds to give the remaining foreign players a chance to arrange flights home but as it happened, bad weather cut short Saturday's play and local player Thriston Lawrence was declared the winner based on his 36-hole score.

Next week's South African Open has been downgraded to an event sanctioned only by South Africa's Sunshine Tour, while the following week's Alfred Dunhill Championship, scheduled to be a co-sanctioned World Tour and Sunshine Tour event, has been cancelled.