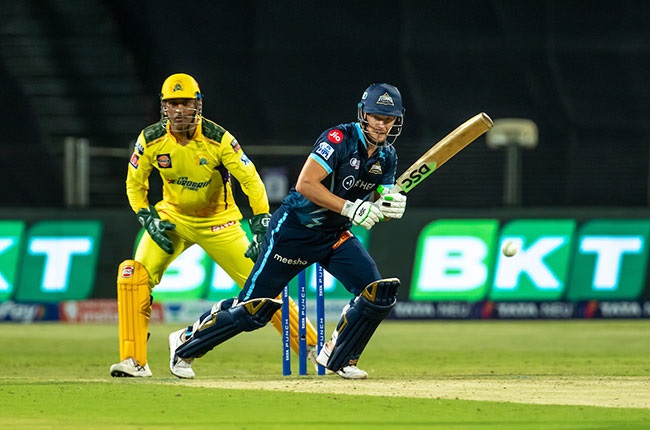 Chasing 189 for victory in the first qualifier, Gujarat rode an unbeaten 106-run fourth-wicket stand between Pandya (40) and Miller (68) to achieve the target with three balls to spare in Kolkata.

With 16 needed off the final over, the left-handed Miller smashed each of Prasidh Krishna's first three balls for six to bring the house down at a full capacity Eden Gardens in the first qualifier.

Known as 'Killer' Miller for his big-hitting, the left-hand batsman smashed three fours and five sixes in his 38-ball knock.

"A lot of people counted David Miller out but for us he was always a match-winner from the time we brought him in the auction," Pandya said of the attacking batsman who has been key to Gujarat's success in their debut season.

"What he did today, we always expected him to do that. But for us it was important to give him importance, love and clarity that what we expect of him and if he fails it's okay, 'it's just a game'."

Afghanistan spin wizard Rashid Khan set up the win with figures of 0-15 that kept Rajasthan to 188-6 despite Jos Buttler's 56-ball 89.

Gujarat, one of two new teams alongside Lucknow Super Giants in the expanded 10-team IPL, now await their opponent for the title clash on Sunday in their home ground Ahmedabad.

The second qualifier on Friday will decide the other finalist.

Rajasthan, who ended second in the table topped by Gujarat, have another shot of making the finals when they meet the winner of Wednesday's eliminator between Lucknow and Royal Challengers Bangalore.

"We are still alive. We still got a chance, disappointed today but dust ourselves off and go again," Buttler said of his team, who won the inaugural edition in 2008. "We have full faith in the guys, we have a really good team."

Gujarat lost Wriddhiman Saha for nought off New Zealand quick bowler Trent Boult on the second ball of the chase with the crowd silenced by the departure of their local hero.

Shubman Gill (35) and Matthew Wade (35) then took charge to take the attack to the opposition bowlers as Gujarat reached 64-1 in six overs of the powerplay when only two fielders are allowed outside the inner circle.

The right-left batting pair of Gill put on 71 before a mix-up between the two saw Gill comfortably run out.

The Australian soon followed, slapping Obed McCoy to deep mid-wicket where Buttler made no mistake.

Pandya stood firm and found able company in Miller, who reached his twelfth half-century of the IPL and named man of the match, as the two put the chase back on track.

Earlier Rajasthan started cautiously before Sanju Samson made 47 off 26 balls, adding 68 with Buttler.

Samson hit five fours and three sixes before falling to left-arm spinner Sai Kishore in his attempt to get another hit over the fence only to get caught at long-off.

Buttler, who leads the tournament batting chart with 718 runs including three centuries, never quite hit his best form as he hit 12 fours and two sixes in his knock.

We live in a world where facts and fiction get blurred
In times of uncertainty you need journalism you can trust. For 14 free days, you can have access to a world of in-depth analyses, investigative journalism, top opinions and a range of features. Journalism strengthens democracy. Invest in the future today. Thereafter you will be billed R75 per month. You can cancel anytime and if you cancel within 14 days you won't be billed.
Subscribe to News24
Next on Sport24
AB de Villiers set for IPL return in 2023: 'I'm not sure in what capacity'