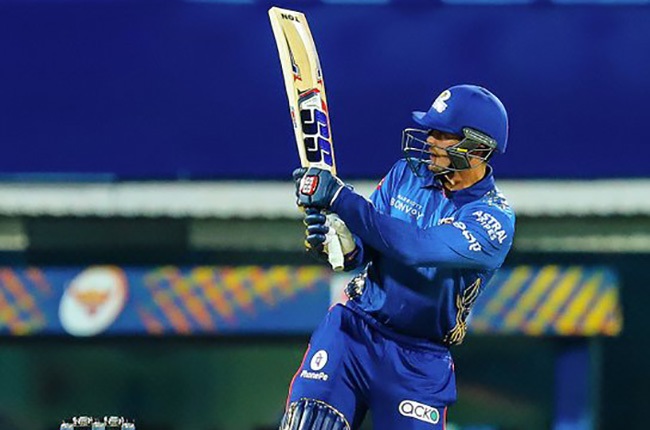 Champions Mumbai Indians inflicted a third straight defeat on David Warner's Sunrisers Hyderabad on Saturday to go to the top of the Indian Premier League.

Quinton de Kock hit 40 and Kieron Pollard a crucial unbeaten 35 as Mumbai made 150 for five off their 20 overs.

Australia star Warner and England's Jonny Bairstow hit early runs but Hyderabad were all out for 137 with spinner Rahul Chahar taking three for 19 and pace bowler Trent Boult three for 28.

Hyderabad are now bottom of the eight team league already facing a mountain if they want to qualify for the playoffs.

Mumbai, who lost their opening fixture to Royal Challengers Bangalore, must thank their powerful bowling and Pollard's big hitting for the win.

Pollard's two sixes in the final over finally proved the difference between the two sides after Mumbai to build on a strong start by South African De Kock and captain Rohit Sharma who made 32.

Bairstow hit 43 off 22 balls - including one six which went through a fridge door in the Chennai stadium - and Warner 37 but Hyderabad's lower order again failed to build on their fine start.

The openers fell in chaotic circumstances, Bairstow stepping back on his stumps and Warner leaving the field fuming after being run out going for a single.

"The two of us were set but it proves that if you don't bat deep, you can't win," said Warner.

Chahar then accounted for Manish Pandey, Virat Singh and Abishek Sharma in the middle order to leave Hyderabad scrambling for runs and fast running out of wickets.

They were all out 13 runs behind with two balls left.

"The way we came out and bowled was very important," said Sharma who acknowledged that he was expecting more from the batting.

"We ticked some boxes, we have more to tick," said the Mumbai captain.