New Delhi - India skipper Virat Kohli expressed disappointment at his team's inability to bowl out Sri Lanka on day five of the third Test in Delhi.

The hosts had appeared to be in the pound seats with three Sri Lanka batsman back in the hut before play started.

However they were met with firm resistance from Dhananjaya de Silva and Roshen Silva in particular and had to settle for a draw having bagged just two wickets on the final day.

Speaking after being named man-of-the-match and series for his run scoring exploits, Kohli said: "When you're not able to finish off in the second innings after having them three down on day four is disappointing.

"But they played well, they showed composure and confidence. The pitch got tired in the end. They didn't give us any chances to get into the game.

"In hindsight, if we would've grabbed our chances in the first innings, maybe they wouldn't have got so many runs. We should've done better. The slip catching and fielding, we need to work on."

Kohli is pleased with his batting and is enjoying being able to express himself in the longest format with three hundreds which included two double tons evidence that he is at the top of his game right now.

The skipper added: "It was kind of a revelation that I can play in Tests the way I can do in ODIs. There's nothing called set pattern these days, if you can believe in yourself, you can achieve anything in any format.

"When I wasn't captain, it was difficult to think of situations. When I was finding my feet in Test cricket, I was under pressure. When I got to a milestone, I relaxed. Now, it's a lot different."

Kohli will miss the limited overs series against Sri Lanka taking a hard-earned break before a massive tour to South Africa, where India have never won a series.

The captain said: "Last time I took rest, it was difficult to handle. But my body is asking for it right now. The workload has been massive, I need rest. My body has taken a toll in the last couple of years. Right now is the perfect time to rest before the tour of South Africa."

We live in a world where facts and fiction get blurred
In times of uncertainty you need journalism you can trust. For only R75 per month, you have access to a world of in-depth analyses, investigative journalism, top opinions and a range of features. Journalism strengthens democracy. Invest in the future today.
Subscribe to News24
Related Links
SL complain to ICC over Delhi air pollution
Bayliss laments century dearth
Skipper Faf still a doubt for Boxing Day
Next on Sport24
Dhawan ton in vain as Punjab down Delhi in IPL 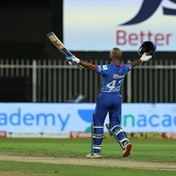