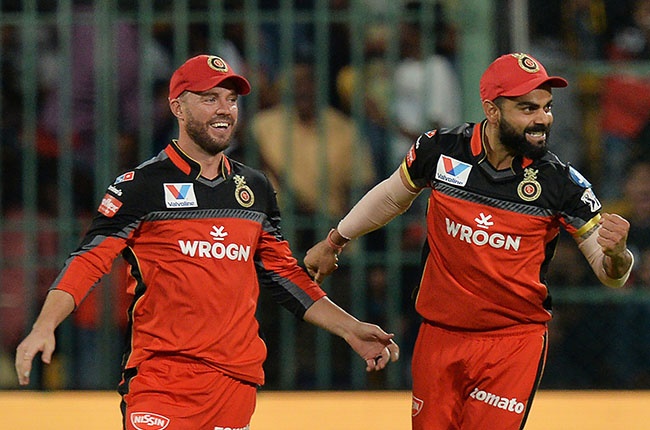 Bangalore thrashed Kolkata Knight Riders by 82 runs in Sharjah as De Villiers stood tall with his 33-ball blitz and an unbeaten century stand with Kohli, who made 33.

Bangalore posted 194 for two, a total their bowlers defended by keeping down Kolkata to 112 for nine in 20 overs.

De Villiers, 36, brought the house down with two of his six sixes going out of the stadium and one hitting a moving car on the road as he went past 3000 runs in the Twenty20 tournament.

"Barring one super-human, everyone struggled on that pitch," Kohli said of his star player who hit his third half-century of the season on a slow Sharjah pitch.

"It was unbelievable. I thought I had a few balls under my belt, and I might start striking. He just came in and struck the third ball, and said he felt good.

"I said you might see a lot of people do what is done in other games, but only AB can did what he did. It was a fabulous knock. We were looking at 160-165, and it was only thanks to his genius we got to 195."

De Villiers took the attack to the opposition bowlers with Kohli playing second fiddle at the other end as the duo scored 83 runs from the final 30 deliveries of the innings.

"I am very happy with my performance. That's all I can say," De Villiers said after being named of the match.

"I got a duck last game, that is a terrible feeling. I am very happy that I contributed. I surprised myself today to be honest."

Opener Aaron Finch, who made 47, and Devdutt Padikkal, who hit 32, set the platform for Bangalore's total with a 67-run stand.

Kolkata's bowling looked dismal in the absence of spinner Sunil Narine who was dropped from the XI after being under warning for a suspect bowling action.

Kolkata skipper Dinesh Karthik said it was just "hard to stop" a "world-class player" like AB.

"He was the difference between the two teams. We tried everything. The only ball was the perfect inswinging yorker. Anything else was going," said Karthik.

We live in a world where facts and fiction get blurred
In times of uncertainty you need journalism you can trust. For only R75 per month, you have access to a world of in-depth analyses, investigative journalism, top opinions and a range of features. Journalism strengthens democracy. Invest in the future today.
Subscribe to News24
Related Links
Explosive AB helps Bangalore thrash Kolkata in IPL
Ishant Sharma's IPL season over due to muscle tear
Finn Russell back in Scotland squad for Six Nations, 4 SA born players included
Next on Sport24
Dean Elgar, Quinton de Kock keep Proteas in game after see-saw Day 1