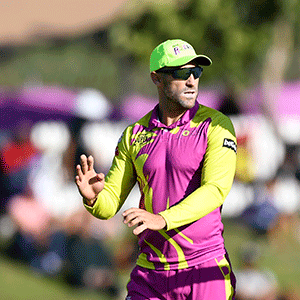 The second edition of South Africa's marquee T20 competition has been met with some criticism given the struggles for crowd numbers around the country, but there has been a marked improvement in that regard over the last week or so and at Centurion on Friday night there were 5 600 present to watch the Tshwane Spartans beat Du Plessis' Paarl Rocks.

The tournament is considered crucial to Cricket South Africa's (CSA) efforts to claw its way out of debt, while it has also been identified as a vehicle to help keep the best players committed to playing their cricket in South Africa.

In the absence of a lucrative broadcast deal in the form of SuperSport, concerns remain over exactly how the MSL will turn into the cash cow CSA needs it to be.

Du Plessis, though, gave the tournament a glowing review after his side's loss on Friday by speaking directly to the quality of cricket on offer.

"I'm very positive, especially about the standard of this league," Du Plessis said.

"I think every player will say this in their own country, but I think that after the IPL, it's right up there standard-wise.

"Our top young players are also coming through so the product is very good, and we've got to make sure that we put a lot of importance on this league because it will grow our game in South Africa and produce a lot more talent.

"It's a shining jewel that we've got to take care of."

The tournament continues on Saturday when the Durban Heat host the Nelson Mandela Bay Giants at Kingsmead from 12:30.

The match will be screened on SABC 3.

We live in a world where facts and fiction get blurred
In times of uncertainty you need journalism you can trust. For only R75 per month, you have access to a world of in-depth analyses, investigative journalism, top opinions and a range of features. Journalism strengthens democracy. Invest in the future today.
Subscribe to News24
Related Links
England harbour hopes of big fightback to save NZ series
Steve Smith becomes fastest man to reach 7 000 Test runs
Anderson as hungry as ever to return to Test cricket
Next on Sport24
Mzansi Super League postponed due to Covid-19