Dolphins and Lions share One Day Cup trophy after washout 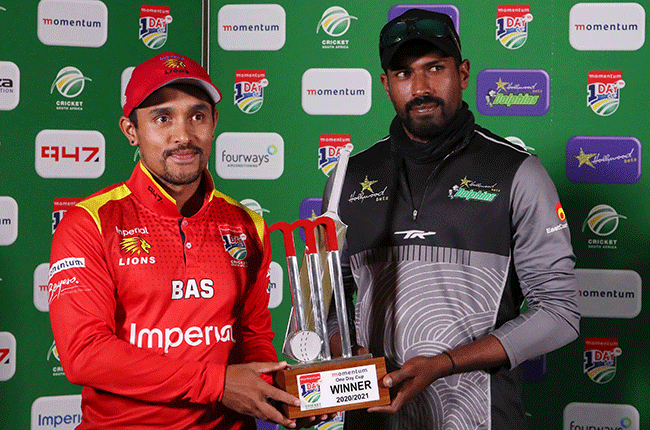 The Dolphins and the Lions were crowned joint One-Day Cup champions for 2020/21 after their final showdown was rained out after 55.2 overs in Potchefstroom on Friday.

The match had been moved to the reserve day after Thursday's scheduled clash had to be abandoned without a ball being bowled following wet weather at Senwes Park, which was hosting the competition in a bio-secure environment (BSE).

The heavy rain had at least cleared sufficiently to get a 45-over per side game going with the Lions batting first after they lost the toss and being restricted to 225 for seven.

In reply, the defending champions reached 37 for two in 10.2 overs, before the skies opened again forcing the players off one final time in what has been a tournament severely affected by the elements.

In the end, it was the rain that was the ultimate winner as the Dolphins, winners of the title last year when the competition prematurely ended by the coronavirus pandemic, and Lions sharing the first trophy on offer for the season.

As for the game itself, the discipled KwaZulu-Natal side were lead admirably with the ball by Ethan Bosch as his four for 41 in nine overs strangled the Lions to a modest 226 target.

Dominic Hendricks (65 off 74 balls, 3 fours) and Nicky van den Bergh (56 off 75 balls, 1 four) were the two mainstays with the bat for Wandile Gwavu's side - their 116-run fourth-wicket partnership proving pivotal after they slipped to 56 for three.

A strong start by the Lions, and in particular Sisanda Magala (2/17), ensured that the Johannesburg-based side were not going to go down without a fight, before rain intervened to draw the curtain on the game and the competition in the North West.

We live in a world where facts and fiction get blurred
In times of uncertainty you need journalism you can trust. For only R75 per month, you have access to a world of in-depth analyses, investigative journalism, top opinions and a range of features. Journalism strengthens democracy. Invest in the future today.
Subscribe to News24
Related Links
Ton-up Root says England need 600-700 in India Test
Proteas up against it at close of play on Day 2
Bowlers revive West Indies in Bangladesh Test
Next on Sport24
One Day Cup final moved to reserve day after washout