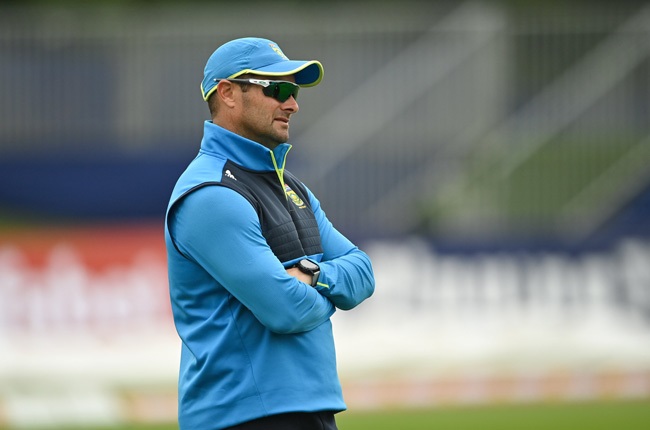 Embattled Proteas coach Mark Boucher, unsurprisingly, was unwilling to discuss anything related to the disciplinary action instituted against him by Cricket South Africa (CSA) in the aftermath of the national side's 3-0 ODI series whitewashing of India.

Questioned over how difficult it is to coach a team that has been subjected to so much off-field issues, the 45-year-old shut up shop.

"I think you'll appreciate that I can't answer that," he said.

Boucher, whose treatment has reportedly elicited a top notch legal defence that will be funded by a group of prominent businesspeople, is charged with "gross misconduct" related to testimony made against him during CSA's Social Justice and Nation-Building (SJN) hearings, which were chaired by Advocate Dumisa Ntsebeza.

Prominent allegations include using racial language against former Proteas team-mate Paul Adams, while also being accused of treating his former assistant Enoch Nkwe "in a manner unbecoming of a leader in (his) position" and inadequately addressing the Black Lives Matter matter within in the squad, allegedly leading to division.

Boucher and his legal representatives commence the proceedings on Wednesday, where timetables will be agreed to.

However, while he fronted up to the media following Sunday's thrilling four-run victory at Newlands, one answer suggested that the saga is, understandably, having a major impact on him.

Asked about whether the summer's successful campaign against India was one of his coaching highlights and whether he could elaborate on any lowlights, Boucher's response was revealing.

"I don't think I have to go into the second part of the question (regarding what were some of the low moments of my coaching career)."

Despite the distractions, the Proteas still managed to keep enough focus and intensity not to slip in what was a dead rubber, something that Boucher intimated was a testament to the unity and mental fortitude of the squad, led by Temba Bavuma.

"We spoke about our journey and not worrying about the series," he said.

"We appreciate this, but our feet are firmly planted on the ground. This just a nice chapter in our continued journey. We have a captain in Tembs (Bavuma) that really is demanding on results and that's good."