Cricket South Africa (CSA) has confirmed that they will be receiving the forensic audit report into suspended chief executive officer Thabang Moroe next week.

Moroe was suspended with pay six months back in December as a result of alleged misconduct, and the CSA board appointed Jacques Faul as acting CEO.

In early June, Moroe, who had still not sat in front of a disciplinary committee, and after taking advice from his legal team, returned to work.

An image of Moroe at the gates of the CSA offices sparked confusion, with the organisation forced to reiterate that Moroe remained suspended.

In a press release sent to the media on Tuesday, CSA confirmed that their board of directors had an initial discussion regarding the first report of the commissioned forensic audit on Monday evening.

A follow up meeting, where they will take the necessary actions from its findings and recommendations, will take place on Friday.

"I would like to stress that the board is treating this matter with urgency and is committed to bringing it to immediate conclusion," commented CSA president Chris Nenzani.

Although the report has been slightly delayed, it is anticipated that it will be received during the course of next week.

Nenzani confirmed, however, that CSA can come to a decision based on the first report.

"We will certainly be able to act on the issue of the suspended chief executive on the basis of the first report," he said. 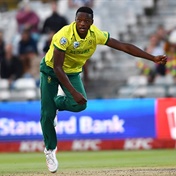