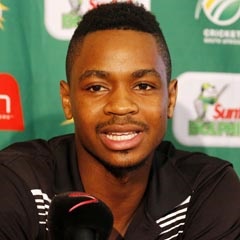 Cape Town - Cricket South Africa (CSA) has approved the National Selection Panel’s (NSP) recommended list of 15 players to be awarded CSA 'top up' contracts as well as the 21 players who will make up the High Performance (HP) squad.

"Each player has a Personal Development Plan (PDP) prepared and this plan is regularly reviewed and monitored by the SA ‘A’ Head Coach.

"The HP List of players has a particular focus on identifying talented black players who are then presented with an individualised PDP (Player Development Plan).

"This is a plan based on a Needs Analysis conducted by the Senior Provincial and Franchise coaches and which provides defined support to each player. This forms part of CSA’s newly adopted Player Performance Plan (PPP). The aim is to grow and develop talented players and prepare them for future SA ‘A’ and National Team high performance."

We live in a world where facts and fiction get blurred
In times of uncertainty you need journalism you can trust. For only R75 per month, you have access to a world of in-depth analyses, investigative journalism, top opinions and a range of features. Journalism strengthens democracy. Invest in the future today.
Subscribe to News24
Related Links
Bavuma joins Cape Cobras
Million-dollar Stokes hits maiden T20 century
Pakistan grind their way ahead
Next on Sport24
Lizelle Lee believes ODIs shouldn't have Super Overs: 'I totally disagree with it'

Choose your newsletters
Voting Booth
With the Springboks losing their last two matches against Australia, how concerned are you?
Please select an option Oops! Something went wrong, please try again later.
Very concerned! Something is not right ...
59% - 3183 votes
I'm not worried. Every team has a bad game. The Boks will bounce back.
18% - 954 votes
It's too early to tell. Let's see how they go against the All Blacks.
24% - 1304 votes
Previous Results
Showmax
Stream SuperSport United vs Kaizer Chiefs