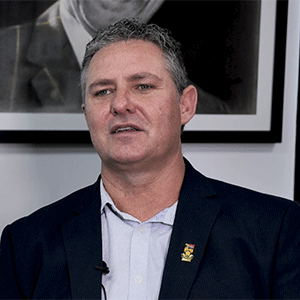 Cricket South Africa's (CSA) interim chief executive Jacques Faul has thanked the Board of Control for Cricket in India (BCCI) for their understanding when postponing South Africa's tour to India.

The Proteas were scheduled to play three-match ODI series from 12-17 March.

The first of three ODIs was abandoned without a ball bowled because of rain and the remaining two were cancelled.

The Proteas arrived back in South Africa on Wednesday and the 16-man squad and management staff are currently in self-isolation for 14 days.

Following the decision to bring the Proteas home over the weekend, on Monday CSA also decided to terminate all forms of cricket in the country for the next 60 days due to the coronavirus pandemic.

Faul admitted that the timing of the outbreak did not effect South African cricket too much despite the cancellation of the One Day Cup and 4-Day Franchise Series.

"We've been very fortunate in terms of the timing, we are towards the end of our season and there's no incoming tour for a couple of months during the winter," said Faul on Wednesday.

"It hasn't impacted financially too big on us for now.. We don't want to panic, we are doing scenario planning.

"We met with the Minister (of Sport Nathi Mthethwa) in a very good meeting. The theme that came out that was: 'A life saved today is a fan for tomorrow'," he said.

Faul reiterated that the Proteas' three-match ODI series against India in India will be rescheduled at a later date.

"I want to thank the BCCI for allowing us to recall our players, it's not an easy decision make. There's big financial implications for India," said Faul on Wednesday.

"We will return and honour our agreement. We've got to thank them for their understanding in this difficult time. The situation was such that the players came first."