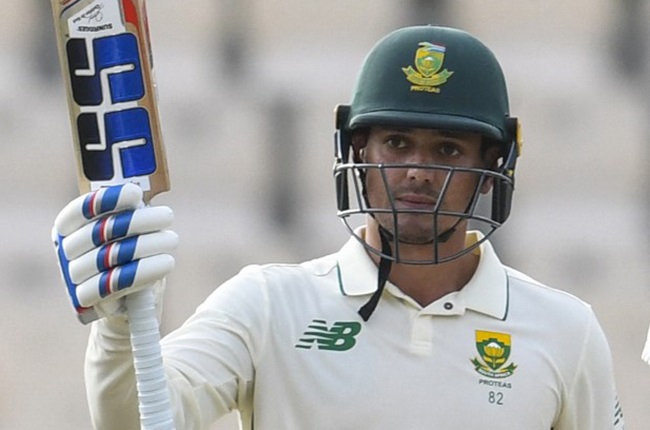 Proteas Test captain Dean Elgar stressed the point that international cricketers' lives weren't all about glitz and glamour and that players are prone to struggle, especially with mandatory bio-bubbles.

In the wake of wicketkeeper-batsman Quinton de Kock's sudden Test retirement for family reasons, Elgar sympathised with players who played internationally across all formats of the sport.

De Kock laid down his gloves in red-ball cricket last Thursday following SA's 113-run loss to India that the Proteas are trying to equalise in the second Test at the Wanderers.

"People think it's glamorous, and you live in massive houses, drive nice cars and get free clothing," said Elgar.

"That is part of it, but the flip side is that it's extremely demanding on personal lives.

"If you're in a relationship, it becomes extremely difficult because you're spending a lot of time away from home.

"As it is now, if you play white-ball cricket, you're away from home for two months playing in the IPL and that's all you do.

"If you play Tests, that's potentially six to eight months away from home in a year. So, I can understand the toll of it on yourself, especially now that we live in these bubbles.

"The people that construct our bubbles are trying their utmost to make it a lot more player-friendly now by giving us luxuries like living in a hotel with a golf course - a lot of guys like to play golf.

"That's just one example of guys having a way out to clear their minds.

"Of late, it's been a struggle for quite a lot of guys because of what's happened around the world with Covid and putting guys into the bubble is not easy.

"We still love what we do, but it's still tough on a few guys. Each personality deals with it in different ways, and we've got to respect those kinds of decisions."

Paceman Lungi Ngidi is one of the players who've been vocal about his mental health struggles in bio-safe environments.

The seamer, who took 6/71 and 2/31 in the first Test in Centurion, told Sport24 last year there was no amount of comfort that can rid the bio-bubble of a claustrophobic feeling, even if they were caked in luxuries.

We live in a world where facts and fiction get blurred
In times of uncertainty you need journalism you can trust. For 14 free days, you can have access to a world of in-depth analyses, investigative journalism, top opinions and a range of features. Journalism strengthens democracy. Invest in the future today. Thereafter you will be billed R75 per month. You can cancel anytime and if you cancel within 14 days you won't be billed.
Subscribe to News24
Next on Sport24
England's Stokes glad to see South Africa wade into 'Bazball' debate