Eric Simons: With no Rabada, Aussies have upper hand Johannesburg - Whether Kagiso Rabada’s appeal against the decision to ban him for the remainder of the Test series against Australia succeeds or fails, the Proteas’ thoughts have probably moved to his potential replacement for the third match on Thursday.

With Dale Steyn having ruled himself out, the Proteas’ selectors would be unwise not to go with the soon-to-retire Morne Morkel, who was a surprise omission from the second rubber in Port Elizabeth.

The reasons for Morkel’s potential selection are pretty basic. At 84 Test caps, he’s a pretty experienced man to bring in.

He is three wickets short of 300 with two Tests to reach the target.

Morkel just has a last man standing aura about him.

But before we extol his virtues, perhaps we should look at what the Proteas stand to lose if Rabada doesn’t get a back-door entry into the Cape Town Test.

Like most people, former Proteas coach Eric Simons thinks Rabada’s absence will give Australia an advantage in the remaining two Tests.

“The most obvious factor is that he seems to have a massive psychological hold on them,” said Simons.

“But it’s not just the wickets. There’s been a lot of chatter about how quick his arm action is.

“You get situations where the opposition is never comfortable against one guy.

“In the dressing room they’ll talk among themselves about how hard he hits the bat.

“That’s what Rabada’s done to them.

“I think they just haven’t felt entirely comfortable against him.”

According to Simons, Rabada’s absence would give the visitors’ bowling attack the upper hand.

“If you asked the captains which of the two attacks they would take, I think they would go with Australia.

“The South African bowlers are good as individuals but it all comes down to how they complement each other.

“We haven’t seen that with the Proteas because they keep changing the line-up.

“Bowling units and partnership are complex but important.

“The Aussies have been bowling together for much longer and they all know their roles.”

“There is an emotional side to it in terms of his milestone, but choosing someone like Morkel means the team is choosing a player with experience.

“Cape Town is a place where you’ve got to pitch it up to get wickets.

“You have to aim to hit the bails at Newlands.

“Two years ago I would have said no to Morkel but he’s recently got more LBWs and bowled wickets than he’s done throughout most of his career.

“He’ll be great at hitting the bails.”

Simons said keeping David Warner and Australian captain Steve Smith quiet was key to putting up a good fight in the second Test.

He said the best way to achieve that was to hatch the right bowling plans to employ against the Aussie cricketers.

“People always know where to bowl to Warner but the problem has been execution.

“If you have a plan you must trust it and be patient even when you’re being hit for fours.

“With Smith I think they’ve bowled the right length more than anything.

“I’ve always felt that if you bowl the right length you can sometimes get away with the wrong line.

“If you bowl the right length with Smith - which is bail height and just outside off in that fourth off-stump region - you limit his scoring options.” 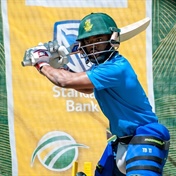