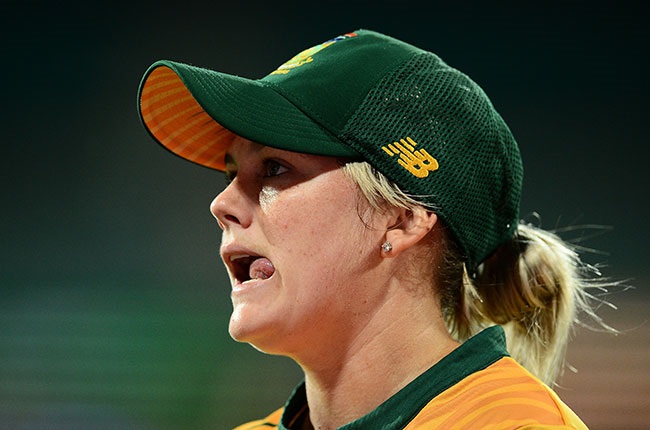 Sport24 asked: How did you sustain your freak ankle injury?

Dane van Niekerk:  I was at home and went down to feed my dogs. It was raining and I tried to hop down a wall by the pool. As I went down, I slipped and landed on my foot but unfortunately because of the uneven ground I heard a snap in my ankle. I immediately knew that my World Cup was in danger, which was devastating. The physical pain I felt didn’t come close to the emotional pain of not going to the tournament... It’s close to a month now since I broke my ankle, so I will be in the moonboot for another two weeks and then I start with rehab. I will do two months of rehab and then hopefully be back on the park by the end of March or the beginning of April if all goes well. It’s very frustrating not being involved with the team. I always have my captain’s cap on and sometimes I want to run onto the field and shout out some tactics. I feel very responsible for the team and felt like I let them down by breaking my ankle. I love my teammates and when they lose it hurts me more. It’s very difficult for me to sit on the side-lines and I don’t think many people understand how tough it is. But the team is in good hands and what they have achieved without me speaks for itself.

Sport24 asked: How have you enjoyed your commentary stint?

Dane van Niekerk: I would obviously rather be playing at this moment but I’m enjoying the commentary, which is a different avenue. I have played cricket for 15 years already, so I’m starting to look for interests post-playing career. Commentary is something I thoroughly enjoy and hopefully I can make a future out of it. As a cricketer, you just rock up at the game and play. That’s all you worry about and you don’t understand what goes on behind the scenes in terms of the TV production. I don’t have a bad word to say about any of my SuperSport colleagues who all made me feel so welcome. Kass Naidoo has taken me under her wing and has been helping me hone my craft. She has been commentating for a long time and is very successful in terms of what she does. It’s good to have her mentoring me in something different. I believe we need more people like Kass in order for the country to take women’s sport and cricket more seriously. We are not seen in the same vein as the men in terms of (public) support, and there is lots of work to be done re payment parity.

Sport24 asked: What’s it like to have your wife as a team-mate?

Dane van Niekerk: Having my wife, Marizanne (Kapp) in the team has more pros than cons (Van Niekerk and Kapp married in 2018). Yes, it's got its challenges and we butt heads sometimes but that comes with the pressure and nature of the international game. We have been together for 13 years, which is almost half my life, so we know how to manage the dynamic as both partners and teammates. At the time when we started seeing each other, we weren’t as busy because the game wasn’t as professional. It gave us time to figure out how we would go about being in a relationship and in the same team. I feel blessed to be able to see the world with the person that I love. I can see how difficult it is for my other teammates to leave their better halves at home for months on end... What makes us such a good partnership is that we are total opposites. Marizanne is a cricket nut and sometimes it frustrates me because she doesn’t switch off from the game. Whereas, I can switch off completely and put cricket to one side. If we were the same type of person it probably wouldn’t have gone for as long as it has. There is still a stigma around same-sex marriage and I don’t think it will ever change. For many, it’s an uncomfortable topic but I’m just thankful we don’t get too much nonsense from people around the world. However, you still get some people who are rude and have their opinions. At the end of the day, I’ve achieved much of what I wanted to with my wife by my side and am blessed to have been able to do that. I have a team, management and organisation that are supportive of us and I have never felt unwelcome in any environment when it comes to cricket.

Sport24 asked: Do you and Marizanne dream of becoming parents?

Dane van Niekerk: Yes, we have a burning desire to have kids. Hopefully in the near future we can become parents. We speak openly about a pregnancy clause and really want one because we are not getting any younger. Marizanne is 32 and I will be 29 in May. We love what cricket gives us but it also takes away as well. It will be nice for the next generation of female cricketers to plan for a family even when they’re still playing the sport. If Marizanne could have had a kid four years ago already, she would have had one. Unfortunately, the reality is our career is dependent on our bodies.

Sport24 asked: What has it been like to be an openly gay athlete?

Dane van Niekerk: I grew up in an Afrikaans Christian home and it was very difficult to come out because I didn’t know if I could tell my parents. It’s always a difficult conversation to have and my parents were very upset when I came out. However, they didn’t take that long to accept it and it wasn’t like they ignored me for weeks or months. They just needed to get over the shock as any parents would. My parents as well as my brother have played a very big part in my life. The worst thing for me would have been if they didn’t want to have me in their lives. I didn’t think that would happen but you have that fear when you come out. They have since been incredible and have a very good relationship with Marizanne, which I'm thankful for. We have become one big blended family… It’s great for gay trailblazers like Josh Cavallo and Megan Rapinoe to be able to speak openly on a global platform. I always say that if you can help one person who is struggling then you’re doing a good job. You need people like the abovementioned soccer players to speak openly about being gay and really fight for what they feel is right. However, I just want to go about my life and keep that part of my life as private as I possibly can because I don’t want it to mask anything I do on the field.

Sport24 asked: How much longer will you play the game for?

Dane van Niekerk: It’s been a difficult four years for me because of all the injuries. The demand on my body is intense and the question is: how long can I push my body to the limit? As the game becomes more professional, the demands increase. I will definitely play for as long as I can and as long as the fire burns in my heart. I will push as far as I can physically and mentally. I don’t know if this injury was a blessing in disguise to feel the passion even more. It has made me really want to come back and push through to another World Cup... I wholeheartedly believe we have got a team that can win this World Cup. It should be the expectation from every single player and member of management within the setup. I feel that this era of players represent the best chance for South Africa to win a World Cup. It’s a very good side and I believe they will produce for the country when needed. On the men’s side, they have endured the ‘chokers’ tag and I’ve always felt it wasn’t fair. Playing at a World Cup is the pinnacle and having to be at your best in every single game isn’t easy. People sit and watch and have their opinions but it’s not simple. The moment people put negative thoughts in your head, it makes it harder to pick yourselves up. I think we should discard the notion of South Africa choking at World Cups because it’s not the case. From a personal viewpoint, I’d like to see what our men and women can do without millions of people telling them something different.

Sport24 asked: How do you deal with criticism of your play?

Dane van Niekerk: I’m on social media and when you read negative comments, that little voice in your head bothers you the whole time. I really got bashed during the Big Bash. I know I didn’t play as well as I should have and didn’t bat as quickly as I could. On the day I just wasn’t good enough. Sports people in general are their own worst enemies and toughest critics. If the public knew that maybe they’d think twice to abuse players. I’m definitely my own toughest critic because I know I’m probably not the fittest or most athletic but make up in other areas. When people say ugly things, they don’t realise how tough I am on myself already and how much it hurts. It’s not healthy because some players take that home with them and I certainly do that at times. However, cricket doesn’t define me. I am Dane van Niekerk - a wife, a daughter, a sister and then only a cricketer and captain.

We live in a world where facts and fiction get blurred
In times of uncertainty you need journalism you can trust. For 14 free days, you can have access to a world of in-depth analyses, investigative journalism, top opinions and a range of features. Journalism strengthens democracy. Invest in the future today. Thereafter you will be billed R75 per month. You can cancel anytime and if you cancel within 14 days you won't be billed.
Subscribe to News24
Next on Sport24
LIVE | Proteas on fire at Lord's as seamers rattle England top order