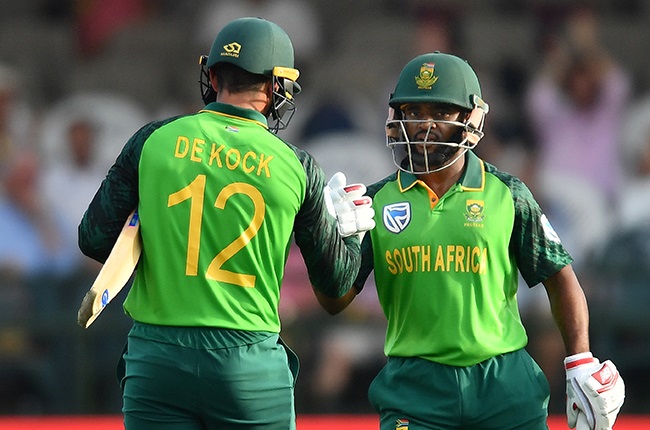 After the high drama of the Test series, the India tour caravan moves to the abbreviated form where the visitors are favourites, once more, to get the better of South Africa.

They did so quite comprehensively on the 2017/18 tour where during the 5-1 win they horribly exposed South Africa's weaknesses against spin.

They have a younger and more exciting team at hand for this series.

Here are five things that may need to pan out for this series:

1. Which Quinton de Kock will rock up for the ODI series?

Quinton de Kock has retired, controversially that is, from Test cricket, but remains an integral part of the white-ball unit.

Will he be a freer batter as compared to the constrained one witnessed in what remains his final Test at SuperSport Park?

The next three games will reveal this, but having not played since his final Test, he could be and should be in a better mental space.

De Kock averages 60 against India in the shorter format with five of 16 ODI Test tons having come against them.

2. How will the Proteas experiment with selection?

The 50-over format is one they haven't quite got to grips with. The Proteas have only won one ODI series under Mark Boucher, which was the whitewash against Australia in March 2020.

Aiden Markram's woeful Test form shouldn't be something that is of concern as the white ball and flatter pitches tend to lessen the effectiveness of bowlers.

However, Janneman Malan's claims in this format are harder to ignore and Markram may be forced to sit out.

3. With no ICC Super League points to gain, how will SA approach these ODIs?

South Africa's ninth position on the ODI Super League log is a tenuous one and they would have needed all the points from this series.

Afghanistan, Sri Lanka, Zimbabwe and the Netherlands are all in a race to get into that magical eighth spot and they're all in action this month.

Ireland, who beat the West Indies 2-1, are all but home and hosed for the 2023 World Cup and that puts Boucher's charges under some pressure.

That said, India will be seeking revenge after unexpectedly losing the Test series to the hosts. 4. How will Marco Jansen bowl in white-ball cricket?

Should Jansen make his debut, he'll go into that particular game with only 13 List A games to his name.

The quick manner with which he adapted to Test cricket, it seems he'll fit in just fine, however.

India may be without former Test captain Virat Kohli and the incumbent white-ball captain Rohit Sharma for this series, but they still remain a formidable ODI unit.

KL Rahul showed glimpses of leadership intelligence in the second Test that India lost, but three games should be enough to provide a window into what kind of a leader he is.

That he's been made vice-captain is clearly a vote of confidence in his leadership abilities for the future.

As an opener, he'll be asking different and tough questions of Jansen in particular, especially with the limited use of short ball.

5. What should be expected from India's new ODI regime?

In Sharma's absence, Shikhar Dhawan probably has a final opportunity to reestablish himself as one of India's premier openers.

At the age of 36, he only has one World Cup cycle in him and it is in such series wherein the senior players like Kohli and Sharma are absent, he has to stand up and be counted.

Shreyas Iyer is another player who has a big chance, especially with India struggling to fill that number four slot that's been troubling them.

They're safe from a bowling perspective, but it's the batting slots that are highly contested.