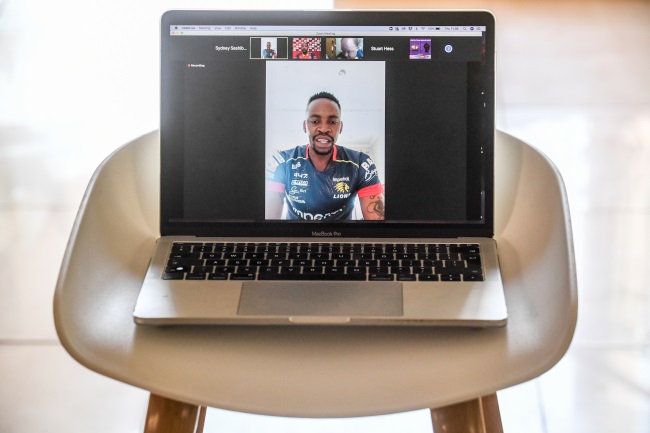 In what was a heart-rending testimony at , former Proteas spinner Aaron Phangiso detailed how not playing regularly in the national team affected him financially.

The 37-year-old Phangiso, who represented the Proteas in 21 ODIs and 16 T20s, explained how he questioned the difference in what the match-day players and those who carried drinks earned.

Phangiso said the pay differential where those who played received R25 000 for ODIs and R12 000 for T20s per player while those who were on the bench had to split one match fee among four of them was something he raised with then team manager Dr Mohammed Moosajee.

"People think when you're on the bench, you still get all of the match fees, which is not true," Phangiso said.

"As a bib guy, if you've traveled with the same team with the guys you've bowled to in the nets in the difficult humidity of India and on the field, they ask for water, you divide the money after tax and you're taking home around R20 000 while they're taking home more than R100 000.

"I took these numbers and I raised them with Dr Moosajee and I told him I'm one of the guys who miss out on the games while some play three or four games. I didn't play at the World Cup, but there are so many tours I went on where I didn't play.

"I asked Dr Moosajee to relook this because I can't be in India for the same amount of time and work hard but take home less than R30 000."

Phangiso said Moosajee, the long serving team manager who also doubled up as the team doctor, organised a meeting with senior players to ventilate the matter before it could be taken up with the South African Cricketer's Association (SACA).

Phangiso, who also recalled a painful incident from his early days as a first-class cricketer for Northerns in a three-day game against Northern Cape where he hardly bowled, but contributed with the bat, said he was shocked at how the senior players responded to his request for match-fee equality.

"I had a meeting with AB de Villiers and Hashim Amla where I told them where I stand, but the response I got from the senior players was amazing," Phangiso said.

"It was shocking because it made me realise that people will always think about themselves before anyone else.

"The response I got was that do I expect a guy sitting on the bench to get the same amount as someone who's playing? I asked how it affected them, because it's not money that comes out of their salary, its just us speaking to SACA about the situation.

"Having spoken to other players from other countries, they said they get the full match fee when they're on the bench because there's already a difference in your salaries."

Phangiso, who last played an ODI in 2016 and a T20 in 2018, said his message got through and the extra match fee for bench players to share was agreed upon.

What Phangiso was consistent on was that the lack of playing opportunities, even if a player gets two out of five games in a series, closes doors that would be opened through regular playing.

"They did see the reasoning and they said they'll meet with SACA and get back to me. What they said was they will get an extra match fee," Phangiso said.

"Instead of four guys sharing one match fee, they were sharing two, which was better, but still not fair enough because I wasn't the reason why I wasn't being picked.

"While it was addressed, I still felt that it was not enough because it wasn't just CSA money that missed out on.

"The more one plays in India, there's potential Indian Premier League exposure, and if one got good performance through playing matches, who's to say what will happen next through getting an opportunity? People don't understand the reasoning behind missing opportunities."

Choose your newsletters
Voting Booth
What are your views on the World Rugby men's Player of the Year nominations for 2021 not including any Springboks?
Please select an option Oops! Something went wrong, please try again later.
It's a disgrace! Both Siya Kolisi AND Eben Etzebeth should have been nominated!
39% - 6382 votes
Siya, at the very least, should have been included after a superb season
6% - 1014 votes
Etzebeth has been SA's best player this year and should feel hard done by
21% - 3465 votes
Get over it! Moaning about this just sounds like sour grapes!
33% - 5446 votes
Previous Results
Showmax
The story of a legend: Sir Alex Ferguson