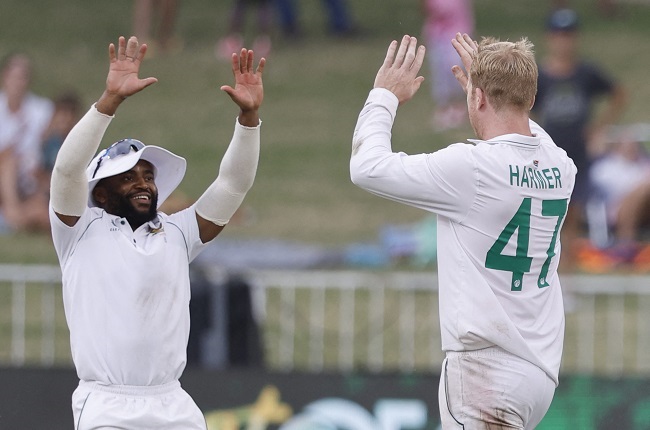 Temba Bavuma and most of the South African cricket community wishes that number is merely a poor April Fool's joke.

Unfortunately, it's the harsh reality of the Proteas vice-captain's prolonged century drought in Test cricket after he once again fell short - agonisingly this time - on the second day of the first Test against Bangladesh at Kingsmead on Friday.

Later in the day, the number 2 316 - the days since Simon Harmer's last international appearance - held a far more positive connotation.

The polarising but committed off-spinner celebrated his return with a career-best score before showcasing why he's been the best tweaker in English county cricket for the past five years by claiming 4/42, leaving the Tigers in trouble at 98/4 in reply to South Africa's 367 at the close.

It was Bavuma's superb 93 and consequent near-miss was the dominant theme of the day initially.

Despite being dropped on 77 when he fended a lifting delivery from the lively Khaled Ahmed (4/92) to slip, where Yasir Ali dropped a tough chance and miscued an extravagant advance down the wicket that could easily have been stumping on 90, his control for the rest of his innings was impeccable.

In fact, it was slices of luck that suggested his expert marshalling of the lower-order batting effort - the Proteas ended on 367 - would be duly rewarded.

Then Bavuma went back to a delivery from off-spinner Mehidy Hasan Miraz that turned freakishly, hit his leg and ricocheted onto his stumps.

The feeling of deflation and depression was tangible, with various members of the national team looking on in disbelief, particularly head coach Mark Boucher.

His only triple figure score remains the iconic, unbeaten 102 he crafted at 2016's New Years' Test against England at Newlands.

Bavuma is nothing less than a team-man so he'll merely be overjoyed by the fact that the tailenders showed some application.

Harmer was a spearhead in that regard, giving an overdue reminder - at least in terms of his output this season - of his batting ability with a career-best, unbeaten 38.

With skipper Dean Elgar then essentially forced to use his spinners in tandem due to a combination of ineffectual seamers and bad light, the 33-year-old was back in the thick of things early.

He took a wicket in his second over, castling Shadman Islam, who went back to a quicker ball that kept low.

After a period where things seemed to drift, Harmer re-ignited the proverbial Protea fire, producing a peach of delivery that turned away ever so slightly and bowled Nazmul Hossain Shanto (38) and then promptly had Bangladesh skipper Mominul at silly mid-off.

He topped off an outstanding return by strangling key man Mushfiqur Rahim down the leg side.

Tantalisingly, it's far from over.

Get the newsletter
Voting Booth
Would you be keen to see the Springboks join the Six Nations?
Please select an option Oops! Something went wrong, please try again later.
Yes! The Northern Hemisphere is the future.
53% - 3433 votes
No! The Rugby Championship is still the pinnacle.
47% - 3052 votes
Previous Results
Showmax
The story of a legend: Sir Alex Ferguson