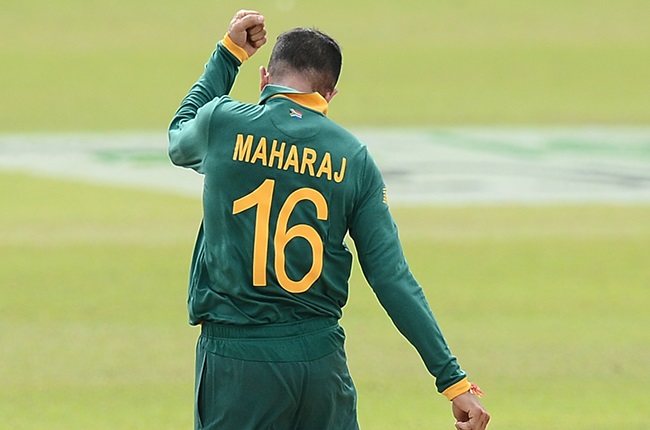 With Temba Bavuma fracturing his right thumb which ruled him out of further participating in the tour, the 31-year-old Maharaj took over as skipper.

But the leadership role is not too foreign for the spinner, given his experience with the Dolphins in recent years.

"It was sort of expected from Kesh. It's not his first roadshow. He's been around, especially in conditions like this before," Boucher told reporters after South Africa's 10-wicket victory in Colombo on Tuesday.

"He's got a great feel for the game, especially when you're playing a lot of spinners. We expected it to be like this."

The home side posted a score of 120, and without losing any wickets, Proteas openers Quinton de Kock and Reeza Hendricks were dominant in chasing the total, ensuring a 3-0 series win with 32 balls to spare.

The series clean sweep comes at a perfect time for the Proteas, with next month's T20 World Cup taking place in the United Arab Emirates.

"I just think the communication and the confidence and trust he has in the spinners, there would have been a lot of other captains in one or two games where he bowled Aiden [Markram] in the power play, and Aidan went for a few runs," Boucher continued.

"He (Maharaj) was still brave enough to bring him back towards the end and that confidence that he showed in Aidan, Aidan fed off of it and produced the goods.

"I just think he's got a good feel for the game and shows that he's got great leadership within our unit as well, which stands in a good stead going forward."

We live in a world where facts and fiction get blurred
In times of uncertainty you need journalism you can trust. For only R75 per month, you have access to a world of in-depth analyses, investigative journalism, top opinions and a range of features. Journalism strengthens democracy. Invest in the future today.
Subscribe to News24
Next on Sport24
ROB HOUWING I Sparkling Proteas’ clean-up still leaves some questions

Choose your newsletters
Voting Booth
The Springboks return to Rugby Championship action to take on the Wallabies this weekend. How will they fare?
Please select an option Oops! Something went wrong, please try again later.
Boks to win by plenty
17% - 1565 votes
The Boks will win, but it'll be tight
55% - 5182 votes
I reckon the Wallabies at home will get the win
20% - 1935 votes
It's too close to call!
8% - 788 votes
Previous Results
Showmax
How Jurgen Klopp saved Liverpool