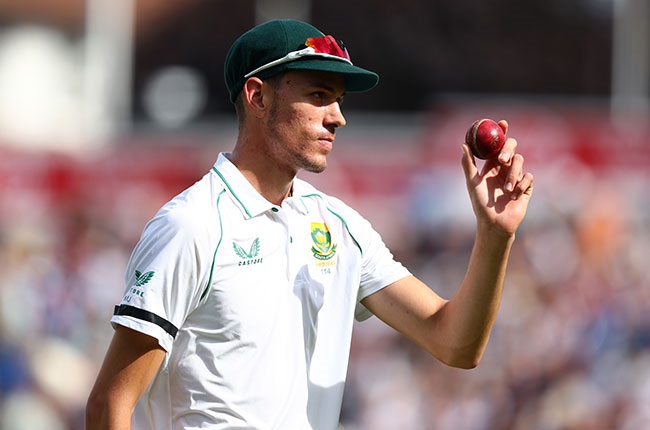 After a stellar 12-month period that's seen him become a regular for the Proteas in Test cricket, all-rounder Marco Jansen was named the ICC Men's Emerging Cricketer of the Year on Wednesday.

The 22-year-old won the award ahead of New Zealand's Finn Allen, Arshdeep Singh of India and Afghanistan youngster Ibrahim Zadran.

It has been an incredible rise for Jansen, who just over a year ago was yet to play for the national team.

As the 2023 calendar kicked in, the 2.09-meter-tall left-armer had become an integral part of the national setup, where he has featured in 12 matches across all three formats.

Jansen has made his mark in Test cricket, in particular, where he has played eight matches, taking 36 wickets.

His wickets in the game's longer format came at an impressive average of 19.02, with the lanky paceman bagging two four-wicket hauls and one five-for (5/35), which came at the Oval in London during the Proteas' tour to the country during August and September.

He also recorded a maiden half-century (59) when South Africa faced Australia in Melbourne during their year-end tour. Overall with the bat, he accumulated 234 runs in his 13 innings over the past year.

Following the news of the ICC accolade, Jansen acknowledged that his first international year superseded his expectations.

"I am lost for words right now after what I think has been a dream year for me," a delighted Jansen said.

"Never in my wildest dreams would I have imagined taking 36 wickets and playing eight Test matches for the Proteas in my first year of international cricket.

“So to have achieved this feat, with the cherry on top of being named as the ICC Emerging Men's Cricketer of the Year, is unbelievable. I am so grateful to everyone who made it possible for me to reach this point so early in my career."

Jansen is still finding his feet in the shorter format of the game and has represented South Africa in three ODIs and one T20 international.

Despite his stellar rise, Jansen is keeping his feet firmly on the ground.“Whatever sport you play, it is about longevity," said Jansen.

"I am still a rookie in international cricket, and these were only the first steps of my journey.

"I don't want to be remembered just by this award; I want to become the best and to get there a lot of hard work lies ahead.

"I am also still developing, and hopefully, with hard work and dedication in the months and years ahead, I will be able to reach my full potential and become a great ambassador for South African cricket.

"For now, I will enjoy the moment, but I look forward to building on my achievements of 2022 in 2023," Jansen concluded.