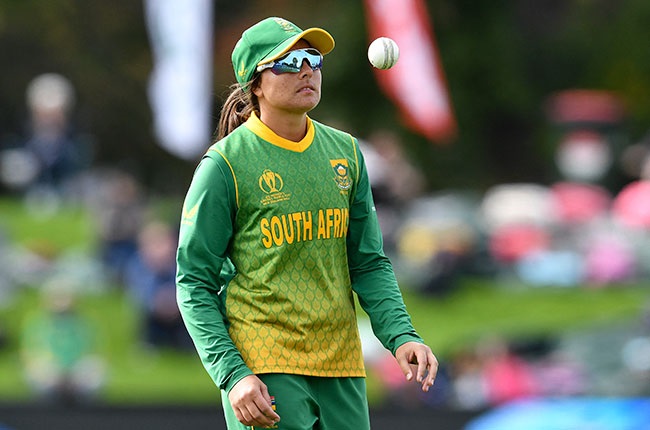 The Proteas women will be without the experience of Marizanne Kapp, Lizelle Lee, Sinalo Jafta and Masabata Klaas in their upcoming tour of Ireland.

The Irish tour consists of three ODIs and three T20Is from 3-17 June in Dublin before they begin their tour of England and the Birmingham Commonwealth Games.

It'll be the Proteas' first competitive action since their semi-final exit at the ICC Women's Cricket World Cup in New Zealand.

Jafta, Kapp and Lee miss out as they recuperate from respiratory illness, while Klaas is also ruled out due to a right shoulder injury.

Mignon du Preez, who recently retired from ODI and Test cricket, is also left out and regular captain Dane van Niekerk, who returned to individual training this month, is also unavailable for selection as she continues her rehabilitation from a left ankle fracture.

Western Province all-rounder Delmi Tucker got handed her first-ever call-up, having notched up 409 runs with the bat in white-ball cricket, as well as over 15 wickets with her right-arm off-spin.

The 24-year-old Tucker impressed in her appearances for the SA Emerging side during last year's tours against their Zimbabwe and Thailand counterparts.

"Marizanne Kapp, Lizelle Lee, Masabata Klaas and Sinalo Jafta, unfortunately, miss out post the World Cup due to medical reasons and we are definitely looking forward to their availability in future tours," said Proteas convenor of selectors, Clinton du Preez.

"We will grab any opportunity to provide the required rotation in the squad and to measure the high-performance and provincial players against the international standards. Delmi Tucker has been rewarded following a very successful domestic season and has really made positive strides with significant contributions, and we are looking forward to seeing her transition into the international arena.

"The selection approach has been very clear and is set out to balance both the preparations towards the T20 Commonwealth Games and the T20 World Cup."

The newly nationally-contracted pair of Tazmin Brits and Nonkululeko Mlaba has also been included in the squad, with Lara Goodall and Tumi Sekhukhune also set to build on their positive experience at the 50-over World Cup.

The T20Is will present an opportunity to prepare for the upcoming Commonwealth Games in Birmingham scheduled between 29 July – 07 August and the 2023 ICC Women's T20 World Cup set to be hosted in South Africa early next year.

Proteas head coach Hilton Moreeng said they're looking at the bigger picture as they build towards a bumper for years.

"It has been a good two weeks for us as a team. We are now confident to say that each and every player in the entire squad, including high-performance players, had very good match preparation and game time post the World Cup," said Moreeng.

"The squad going now is a combination of a lot of youngsters that we want to give a lot of exposure to and see how they go, especially in the certain skill sets we are looking for in the future. Overall, some of the experienced players are there to continue building on the successes we have had so far," Moreeng explained.

"When we are looking at the T20Is, there is a bigger picture when it comes to that. It is a new beginning for us this year, building up towards the T20 World Cup and the Commonwealth Games.

"The most important thing is to see how we can balance the skill and where we can include youngsters to see how they go about it when given an opportunity. At the end of the day, the only way they can learn is by playing and the more senior players you have around, the more they can help them grow into those skills.

"The senior players know what is at stake. The ODIs are the ICC Women's Championship qualifications for the next 50-over World Cup, so there is a lot at stake in the sense of that we are also looking to grow our base."

All ODI matches will start at 11h45 SA Time