'Nervous' AB hitting it better than ever

Cape Town - Proteas star AB de Villiers was at his absolute best on Wednesday as he smashed 176 off 104 in his side's 104-run victory over Bangladesh in Paarl on Wednesday.

De Villiers, who has only recently made himself available for the Proteas in all formats following a break from the game, fell just 12 runs short of Gary Kirsten's 188* - the highest score by a South African in ODI cricket.

The break, it seems, has done De Villiers good. Still, he confirmed after the match that it had felt like his first knock for the Proteas when he walked out to bat at 90/2.

"I was quite nervous starting off ... it felt like my first game again walking out to bat," the 33-year-old said.

"It's great to be back. It's a huge privilege to play for my team and my country. For the last few months I've been working really hard on my game and all I wanted to do was get back into the side.

"I just needed a couple of months away with the family, which I got."

It won't be good news for opposition sides, but De Villiers feels like he is at the very top of his game right now.

"I'm hitting the ball as well as ever and it felt that way out there ... I could feel the ball coming off really well," he said.

"It's just nice to contribute.

"I watched all the games the guys played and I've been in contact with the guys. It felt like I never really left, but I did miss being on the park and playing with the guys for South Africa."

De Villiers had also threatened to become the first batsman in the history of ODI cricket to have scored a double hundred having not opened the innings.

"I just want to get my rhythm going and get as many as I can for the team. It's not something I play for." 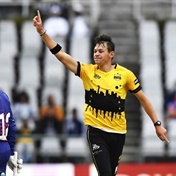