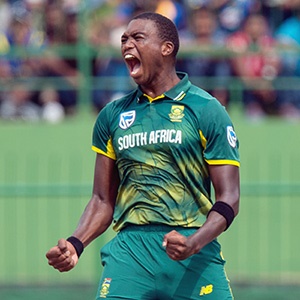 Cape Town – Time is running out for the least experienced of South Africa’s current, widely-envied ODI pace trio to be properly street-wise by the time World Cup 2019 comes along in England next year.

Even if he were to play every remaining match (a dozen, as things stand) from here to the tournament in late May, Lungi Ngidi would only have got to 23 games in the format by the time he graces that event for the first time.

The strapping 22-year-old has played 11 ODIs thus far, and there are two further ones to come in the three-match series in Australia – next up is Adelaide Oval on Friday, 05:20 SA time – before another 10 split between the visits to our shores later in the season by Pakistan and Sri Lanka.

By contrast, the other members of the lively triumvirate, Dale Steyn and Kagiso Rabada, could be boasting roughly 130 and 65 caps respectively by the time the tournament begins, something that makes them understandably better equipped in many ways to cope with the unique demands and pressures the World Cup throws up.

Just for one thing, the 35-year-old Steyn has already played in two (2011 and 2015) and even if Rabada, 23, will also be undertaking his World Cup baptism next year, he at least can join Steyn in having decent prior knowledge of bowling in England’s unique conditions at international level.

So might we have reason to be concerned about the ongoing rawness, in several respects, of Ngidi when CWC 2019 gets going?

My own, fast-increasing inclination: no, or not much.

A swelling feature of the KZN-born speed merchant’s game for the Proteas -- in all formats -- so far is the extraordinary maturity he demonstrates, something that should go a long way to offsetting both his lack of familiarity to the United Kingdom and presently virgin status as a World Cup campaigner.

That quality was evident once again on Sunday, when the Proteas won the toss in the first Australian ODI at Perth Stadium and Faf du Plessis rightly decided to let loose his pacemen on a dreamily swift surface.

Ngidi might easily have got just a little carried away by the favourable table on offer, especially considering that it was his first full international appearance for his country Down Under and a chance to truly “let rip”.

But he looked for all money like a man with a plan, someone not to be shaken out of his most immediate goals and focus.

The 1.94m, though also ample-thighed individual channelled his aggression superbly, still being prepared to mix up his deliveries intelligently – he is not afraid to go cross-seam and the like – while lacking nothing in aggression and body-peppering menace even as he bowled just a little within himself pace-wise and cleverly let the pitch, which also allowed some movement off the seam, aid him in his industry.

Certainly helped by sharing the damaging opening assault with Steyn, who pretty much rolled back the clock to his very heyday in terms of both zeal and penetrative qualities, it may have escaped some observers’ attention that Ngidi had the rare distinction in these high-tempo cricketing days of including three maidens in his 8.1 overs (figures of 2/26 eventually) that impressed even some of the more dyed-in-the-wool home television commentators.

They now know all about his natural, almost Flintoff-like “heavy ball”, for a fellow of his size and build, but also the subtleties and sense of innate calmness that seem to drive him on productively.

There is clearly a level head on those still young shoulders, and that can’t be bad for South Africa’s cause as they edge closer to a tournament where that hallmark, let’s face it, hasn’t always been too prevalent in their more pivotal matches through the CWC annals.

Ngidi has increasingly bright stats in the ODI landscape: 24 scalps from his 11 matches at an average of just inside 20 (19.83) and more than acceptable economy rate for a rookie of 5.36.

In his last three appearances, as well as snaring a collective six wickets, he has “travelled” at well inside four runs to the over each time – 2.32 runs to the over against Zimbabwe in Kimberley, 3.71 against the same foes in Bloemfontein, and now 3.18 in his first exposure to Australian turf at Perth.

Certain comparisons in cricket don’t always have the most meaningful value, but it is nevertheless interesting enough to note that, also after 11 ODIs each, the enormously more established Steyn had 14 wickets (economy 5.77) and Rabada 21 – so both below Ngidi for dismissals, although Rabada’s economy was a superior 4.87.

Keep on the same, broadly upward curve over the next few months and Ngidi is possibly going to be one of the most hyped global figures, and with reason, in the immediate lead-up to CWC 2019 …

We live in a world where facts and fiction get blurred
In times of uncertainty you need journalism you can trust. For only R75 per month, you have access to a world of in-depth analyses, investigative journalism, top opinions and a range of features. Journalism strengthens democracy. Invest in the future today.
Subscribe to News24
Related Links
West Indies opt to bowl against India in 2nd T20
PICS: Mzansi Super League trophy unveiled
Foakes leads England recovery in Galle
Next on Sport24
Pakistan confirm tour to South Africa next year