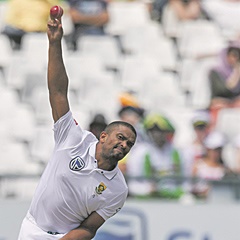 Johannesburg - Vernon Philander, the Proteas’ boy wonder in the first Test between South Africa and India at Newlands, doesn’t exude the physicality of a bowler who’s about to run through batting line-ups. He’s not rangy like most quicks, doesn’t bowl particularly fast and that slight pot belly of his gives the rest of us hope of being professional sports players. But since he started playing for the Proteas six years ago, he’s been the team’s go-to bowler.

What makes him such a dangerous bowler?

Vern makes a batsman play four, five or six times an over. That’s about six chances to get a wicket.

What he does is a lesson in what we teach players about hitting areas. People think you have to bowl faster or have a miracle ball to get results, but Vern proves that, if you land the ball in the right place at the right time, you’ll be a handful.

Why is it so important for him to have the new ball?

The important thing about South African and Australian cricket is that you’ve got to make the batsman play in the first 20 overs. This is particularly important with the Kookaburra ball, which goes soft around the 20-over mark.

Like Dale Steyn, Vern is a genuine swing bowler. You need to give the new ball to someone who’ll make good use of it.

If he’s not that quick, why is he still such a handful?

Australian wickets are more batsman-friendly, so you hit the deck harder. During our four-day competition, the wickets were less bowler-friendly.

That’s why the likes of Robbie Frylinck and Rory Kleinveldt did well. Vern prospers because he has those skills. He’s similar to Josh Hazlewood in that he hits areas and does something with virtually every ball. It’s difficult to line up against guys like that, whatever their pace.

The batsmen know what’s coming. Why can’t they do anything about it?

It’s not something you can coach. Guys think it’s easy with Vernon bowling at 128km/h. You get on the front foot and drive him, but he’s never quite there and can still slip you a bouncer. That’s when you start wondering where the hell you are going to get a run.

What does all this say about his mentality?

Confidence is a critical thing for a swing bowler to have. A swing bowler has to be confident. If he isn’t, he’ll struggle with his wrist and the ball won’t come out well. You can’t be running towards a batsman thinking you’re going to be hit for four. You have to run thinking the batsman’s going out.

Vern is confident in his ability to land the ball where he wants it and trusts his process. His results over the past six years speak for themselves.

He’s no Alan Donald, Brett Lee or Kagiso Rabada. How is he matching their achievements?

This proves that fast bowlers are born, not made. Vern’s a good athlete with a beautiful bowling technique. You can’t look at him and say he would have more pace if he did this or that. Vernon is highly skilled and that’s how he gets results.

Does the fact that he’s a decent batsman help?

As a bowler who batted, I always said you could pick up things about batsmen from batting. I’m sure Vern sits and asks how he would bat against himself, so it does help.

All this talk about his relying on favourable conditions to do his thing, is it true?

Related Links
Side Entry: Could the Proteas’ pace-heavy team be a sign of a new approach?
Ngidi’s no longer a young quick in a hurry
No limits for high-flying Rabada
Share
Next on Sport24
Proteas backlog? What backlog? IPL rules world cricket's roost