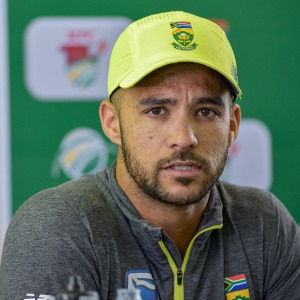 The injection of some new faces and fresh energy will be a welcome boost, along with a change of format and mindset.

Duminy believes it will be important for the squad to move on from the ODI ‘baggage’ and to target the series with renewed perspective and motivation.

The players held a practice session at SuperSport Park in Centurion on Saturday, and given the short turnaround of formats, will have to be positive and on the front foot for the first match at Wanderers Stadium on Sunday.

“The new faces will definitely help,” Duminy said ahead of the match on Saturday.

“We will feed off the freshness of the new faces around. It has been a dismal one-day series for us where India has outplayed us and it is something that we have to take on the chin. It is perhaps a realisation for us that we are far from the finished article going into a Cricket World Cup in over a year.

"It’s a good reality check and each player has to look at how they can improve and make it into that 15-man squad in a year. I am quite excited to be able to lead. The leadership role has brought out the best in me over the last four months with the Cape Cobras.”

Although a number of the regular fast bowlers and senior players have been rested, Duminy says there is a strong emphasis on winning.

The squad boasts three new caps in Heinrich Klaasen, Christiaan Jonker and Junior Dala, all of whom have been rewarded for consistent performances on the domestic scene.

“For us as players, you want to win every series that you represent your country, there is no preference,” Duminy explained.

“T20 cricket will be looked at as a format where you can give players opportunity but it is still an opportunity to represent your country, we want to win. There is no difference of importance according to Test, ODI or T20 cricket. There are a lot of guys making their debut in the squad so it is a great occasion for the squad and environment.”

The match will be played in celebration of Nelson Mandela’s centenary year (2018) and both teams will be playing in honour of the legacy he has built for the country and sport in particular.

The Proteas will be wearing branded playing tops, and other key activations will be executed in stadia.

The Proteas women's team will kick-start the double-header on Sunday against India at 09:45, followed by the men’s team at 14:30.