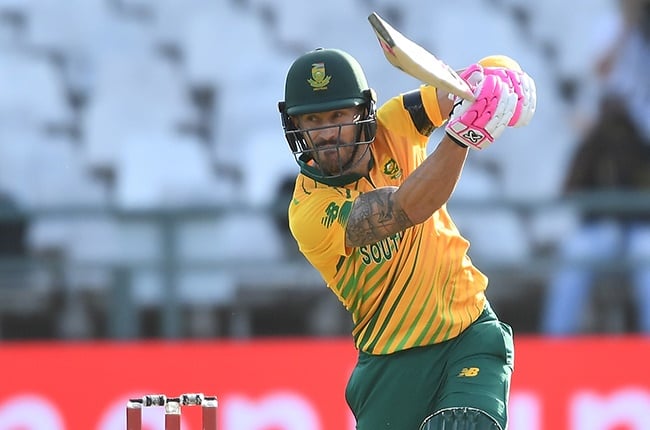 The Proteas will not have the experience of T20 'specialists' Faf du Plessis, Chris Morris and Imran Tahir to call upon at next month's T20 World Cup in the United Arab Emirates and Oman.

Notable exclusions included Du Plessis, who captained the Proteas at the last T20 World Cup in 2016.

Du Plessis, who retired from Test cricket in February, said that he remained available for South Africa in white-ball cricket and was targeting this year's rescheduled World Cup.

The 37-year-old star batsman hasn't played a white-ball international since December last year despite plying his trade successful in T20 leagues around the world.

"Faf has got a wonderful record but we wanted to be consistent in selection and this is the group of players we have gone with," the selection convener Victor Mptisang said on Thursday.

Speaking to reporters after the squad announcement, CSA Director of Cricket Graeme Smith said that it was always going to be difficult to find a place for Du Plessis.

"When you're working with free agents, you have to come together that works for both the team and the free agents, they're obviously attracted to various leagues and then the squad has its own requirements on how they build towards a World Cup," said Smith.

Morris, meanwhile, has not played for South Africa since the 2019 Cricket World Cup and despite having discussions with CSA - he was not an option.

The former Proteas all-rounder made headlines this year when he was bought for an IPL auction record fee of $2.2 million by the Rajasthan Royals.

Smith confirmed that Morris was not up for consideration for next month's World Cup, scheduled to start from 17 October.

"Outside that Chris made himself unavailable. Most of our engagements with Chris [came] through his agent and has said that he is unavailable for international cricket."

Meanwhile, spinner Tahir did not make the squad after retiring from ODIs in 2019 but remained available for T20Is.

"Imran has had a great run and is still successful but we were very confident in the current crop of spinners we are developing, we felt that they deserved the opportunity," said Smith.

Mptisang explained his decision in not selecting any of the free agents.

"Yes, there has been consideration about the free agents but we also needed to make decisions based on what we felt was our best chance going into a World Cup and the guys who've played for the Proteas team," said Mptisang.

We live in a world where facts and fiction get blurred
In times of uncertainty you need journalism you can trust. For 14 free days, you can have access to a world of in-depth analyses, investigative journalism, top opinions and a range of features. Journalism strengthens democracy. Invest in the future today. Thereafter you will be billed R75 per month. You can cancel anytime and if you cancel within 14 days you won't be billed.
Subscribe to News24
Next on Sport24
Elgar gleeful as ex-Kolpaks bolster Proteas' England challenge: 'Stupid not to use them'