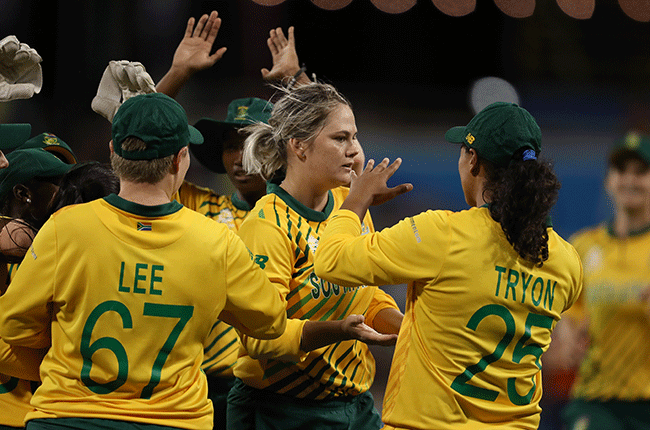 The star duo missed the Pakistan and India series due to back injuries, which they sustained in December.

Luus was handed the captain's armband and oversaw an ODI and T20 series win against Pakistan and now an ODI series victory in India.

In the five-match ODI against India, South Africa scored eight half-centuries and a century while the bowlers continually produced tight displays in Lucknow.

Luus acknowledged that it will be a difficult side to select once their injured players return.

"It'll only make it stronger, I think a lot of girls put up their hand in this series, and no matter the 11 when they do return, it'll be the strongest 11," Luus told reporters on Wednesday.

"And the people who are missing out will be exceptional players who garnered the experience in this series without Dane and Chloe. It's going to be a difficult 11 to choose with a lot of players in form but it's a good headache to have when a lot of players are in form, scoring runs and taking wickets."

Tryon told Sport24 this week that her recovery was going well and that she should be "up and running in the next few weeks".

Meanwhile, Moreeng did not rule out Van Niekerk and Tryon's swift return to the national side but stated that it was a good sign to pick from a bigger pool of players.

"At the end of the day, you want your best players to play. Yes, you look at the form and the calibre coming through," Moreeng told reporters on Thursday.

"It's good that we are seeing different people putting up their hand, which means the competition in the side becomes better and we're starting to move in a good direction.

"Those coming in will just strengthen the squad and at the end of the day, it's about who's suited for the conditions and the combinations. Now there's a bigger pool of players and it's all about the team."

It was the Proteas' third successive ODI series win and their 10th victory in their last 11 ODIs.

Luus believes experience and playing more international games were the reasons for the Proteas' success.

"I think it just comes with experience. The more games you play, the more you get yourself into certain pressure situations, which you need to get through. We've been in enough pressure situations to know where we are struggling and where we can improve," said Luus.

"It comes down to the more games you play. If you look at teams like Australia and England, they've played in a lot of games and been in semi-finals and finals, they know how to handle the pressure... And that's what we want to keep doing, getting into semis and working to get into those finals.

"We're a world-class team and we are working hard for a lot of years. We want to be on top of the world and compete with Australia and England and I think we are there. The more we play games against your top teams like India the more we'll know how to deal with pressure situations."

The Proteas continue their tour of India, with the first of three T20s starting on Saturday (15:30 SA time).