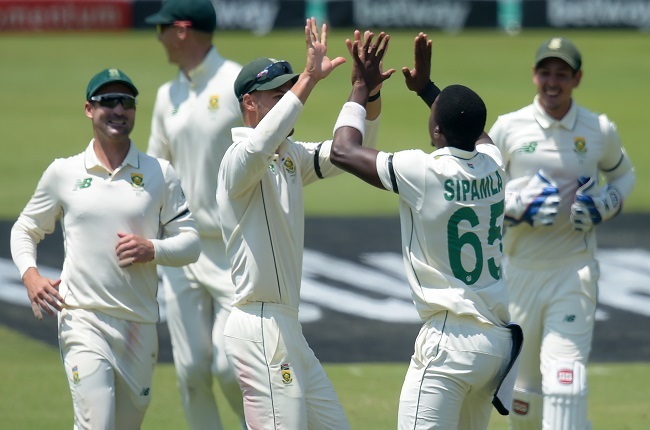 Runs continued to be scored at a rapid rate in Centurion on Sunday as the Proteas emulated their Sri Lankan counterparts at tea on the second day of the first Test.

South Africa reached a commanding 180/1, clearly making little fuss of conceding their highest Test total against the Islanders at home and whittling the deficit down to 216 runs.

Openers Dean Elgar and Aiden Markram spearheaded their side's healthy position, compiling a stand of 141 in under 29 overs.

Astonishingly, it was South Africa's first first-wicket partnership of over 100 since October 2017, when the pair put on 243 against Bangladesh in Bloemfontein.

Markram was the initial aggressor, playing authoritatively all around the wicket in stroking 14 boundaries in his 68.

Yet by the time he reached his fifty, his more nuggety partner had caught up with him.

Elgar was customarily strong on the leg-side and batted with such confidence before the break that his strike rate nudged past 80.

The was a brief moment of joy for Sri Lanka when the left-armed Vishwa Fernando went around the wicket to Markram and tempted him into launching an expansive drive that caught a thick edge and flew to backward point.

But that didn't faze Elgar and Rassie van der Dussen (8*), who continued to look comfortable, with the former closing in on a 13th Test century on 86.

Following the news that middle-order stalwart Dhananjaya de Silva is out for two weeks with a thigh strain, the Sri Lankan attack suffered a meaty blow when Kasun Rajitha went off a ball into his third over with a suspected groin problem.

Earlier, Lutho Sipamla looked like a bowler transformed as he spearheaded the Proteas' mop-up of Sri Lanka's lower order on the second day of the first Test in Centurion on Sunday.

The 22-year-old debutant, who endured a chastening opening day, clearly gained a lot of confidence from his maiden Test wicket late on Saturday as he added another three to end with fine figures of 4/76 as the visitors were bowled out for 396.

Such was his influence that many were left scratching their heads as to why he didn't take the ball from the start.

Instead, the South Africans still leaked 56 runs within the first hour of play, predominantly due to a freewheeling innings from the previously unheralded Dasun Shanaka, who improved on a highest score of 17 by smashing five sixes in his unbeaten 66.

He was particularly severe on Anrich Nortje, whose pace and aggression wasn't channelled effectively.

Yet once Sipamla entered the attack, things changed.

Adopting a fuller length, the Highveld Lions youngster had the dogged Rajitha caught at slip before producing a splendid delivery to Vishwa Fernando, a full, fast and straight one that nipped away ever so slightly and proved too good for the tailender.

The hat-trick delivery was averted, but shortly thereafter Sipamla had No 11 Lahiru Kumara ducking for a short one, who left his bat hanging in the air for Rassie van der Dussen to complete a fumbling and juggling grab.

We live in a world where facts and fiction get blurred
In times of uncertainty you need journalism you can trust. For only R75 per month, you have access to a world of in-depth analyses, investigative journalism, top opinions and a range of features. Journalism strengthens democracy. Invest in the future today.
Subscribe to News24
Related Links
'Shattered' Jeremy Fredericks on Robin Jackman: 'I believe he was the best in the world'
Injured de Silva to miss rest of South Africa series, won't bat at Centurion
Jamieson strikes as Pakistan stumble in reply to New Zealand's 431
Next on Sport24
Three debutants as Proteas bat first in 1st T20 against Pakistan