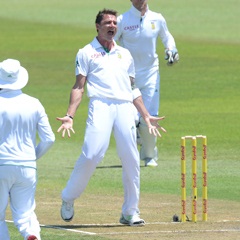 Cape Town - South African strike bowler Dale Steyn could miss next week’s third Test against England as he has yet to recover from a shoulder problem while fellow paceman Vernon Philander has been ruled out of the series, Cricket South Africa said on Wednesday.

Steyn missed the second Test, which ended in a draw in Cape Town on Wednesday, after suffering a shoulder spasm during the first test in Durban, where he bowled only 22 balls in the second innings.

While a scan in Durban showed no muscle damage, Steyn is seeking a second opinion from another specialist ahead of a fitness test when the squad meets up again in Johannesburg on Monday.

Steyn suffered a groin strain in November and missed three of the four Tests in India and his latest injury has been blamed on a heavy bowling workload so soon after the layoff.

Philander has been sidelined since suffering ankle ligament damage in India during a warm-up football drill.

Kyle Abbott, who also missed the second Test with a hamstring strain, has been declared fit for the next encounter against England.

The third Test will take place at the Wanderers from January 14-18.

We live in a world where facts and fiction get blurred
In times of uncertainty you need journalism you can trust. For only R75 per month, you have access to a world of in-depth analyses, investigative journalism, top opinions and a range of features. Journalism strengthens democracy. Invest in the future today.
Subscribe to News24
Related Links
Adams wants ‘old school’ batting from Cobras
Amla: Biff surprised, Polly less so
Klusener wants more runs from Dolphins
Next on Sport24
Lee relishing a return to cricket at WBBL 06