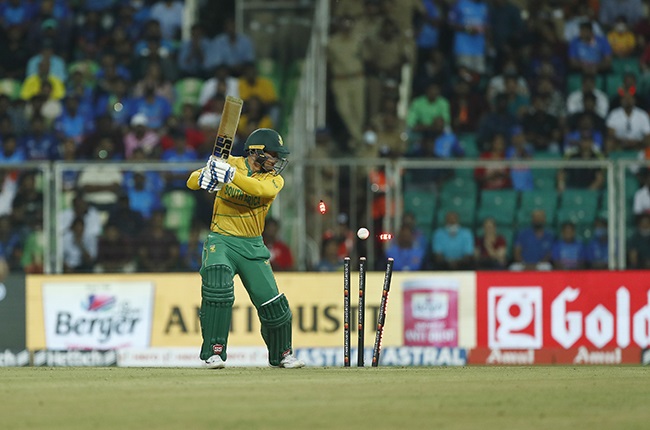 "When you go five down in the powerplay, it's very difficult to come back from there."

Those were the words of South Africa's unlikely batting hero, Keshav Maharaj, after the first T20 against India in Thiruvananthapuram on Wednesday.

It was a dismal outing for the Proteas, who could only muster 106/8 from their allotted 20 overs before India knocked the runs off in 16.4 overs.

Maharaj top-scored with 41 for the visitors, who were rocked by superb new ball spells from Deepak Chahar (2/24) and Arshdeep Singh (3/32).

After just 2.3 overs, the Proteas had hit a new rock bottom at 9/5, and while the Maharaj-led recovery after that was actually quite impressive, the damage was done.

There four ducks in the Proteas top six, with three of them being first-ballers.

Here, we look back at how the collapse happened.

The skipper had come out with intent, throwing the bat at a couple of away swingers without any success. Chahar waited until the final ball of his over to swing one the other way, and Bavuma had no answer to this in-ducker. He was clean bowled, and tucked the bat under his arm straight away and made the long walk off. Bavuma is under a world of pressure right now, but what happened in the minutes that followed his dismissal was placed the entire Proteas batting unit under the microscope.

Just like that, the Proteas were two down. De Kock has been in horrible T20 form on the international stage, and it continued here with a nothing shot. This one swung away from the left-hander, and De Kock shaped to cut only to chop onto his own stumps. It was a disastrous start for South Africa, but things were about to get much, much worse.

Don’t miss the LIVE coverage of the #INDvSA match on @StarSportsIndia pic.twitter.com/aLfcrJxs1C

In at No 3, Rossouw surely needed to soak up a bit of pressure but went on the drive immediately. This also moved away from the left-hander, and perhaps wasn't as full as Rossouw had hoped. He edged through to Rishabh Pant, who made no mistake.

Like Chahar did in the over before, Singh then displayed his ability to swing it both ways to devastating effect and Miller was the victim, clean bowled by one that shaped back into him. It was Singh's third wicket of the over, and the feeling of disbelief could be heard and felt in the commentary of SuperSport's Pommie Mbangwa.

5 wickets summed up in 11 seconds. Watch it here ????
Don’t miss the LIVE coverage of the #INDvSA match on @StarSportsIndia pic.twitter.com/jYeogZoqfD

This was easily the worst shot of the collapse, with the young Stubbs throwing the bat at one that was swinging away from him. It would have been a wide had he left it alone, but Stubbs couldn't help himself. The ball flew to third man