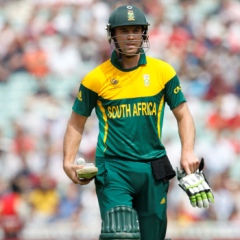 AB de Villiers (AFP)
Cape Town - Proteas captain AB de Villiers believes they have a lot to play for in the final ODI against Sri Lanka in Colombo on Wednesday.

The Sri Lankans have an unassailable 3-1 lead in the five-match series but for De Villiers the final game is very important for the future of his young side.

"Three-two does sound a lot better than 4-1," he told the Cape Times.

"But there's a lot to gain in this last game, and looking at our record here, to go away with a 3-2 series loss, having come here with a youngish side, is not a bad result in the long run."

The Proteas lost their last one-day series in Sri Lanka 5-0 back in August 2004.

"There is still pressure on us. We represent a proud sporting nation, and we as a team also take pride in how we play," said De Villiers.