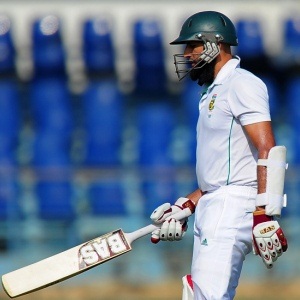 Elgar was dismissed by off-spinner Dilruwan Perera in the truncated start-stop first session that saw the visitors add 17 runs off seven overs.

The downpour led to an early lunch with the Proteas placed at 55-2 while chasing a target of 369. They require 314 more runs with eight wickets in hand.

Quinton de Kock, promoted up the batting order, was batting on 28 with first-innings centurion and skipper Hashim Amla on four at the break.

Perera (1-27) gave the side an early breakthrough when Elgar failed to judge the ball that pitched on the middle but turned to clip the off-stump.

Elgar made 13 after facing 65 balls and shared 43 runs for the second wicket with De Kock.

Elgar's opening partner Alviro Petersen was out for a duck late on Sunday, being caught by Kithruwan Vithanage off left-arm spinner Rangana Herath (1-7).

South Africa lead the two-Test series 1-0 after winning the opener in Galle by 153 runs. Even if they draw this game, they will reclaim the number one world ranking from Australia.

We live in a world where facts and fiction get blurred
In times of uncertainty you need journalism you can trust. For only R75 per month, you have access to a world of in-depth analyses, investigative journalism, top opinions and a range of features. Journalism strengthens democracy. Invest in the future today.
Subscribe to News24
Related Links
Mahela relishes Proteas test
Proteas skip ‘brave cricket’
Next on Sport24
As it happened: SL v SA, Day 5