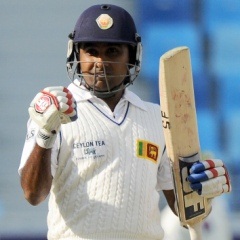 Colombo - Star Sri Lankan batsman Mahela Jayawardene said on Monday he would retire from Test cricket after the series against Pakistan in August, drawing the curtain on an almost two decade-long Test career.

Jayawardene, 37, who has been a stalwart of the batting order since making his debut against India in 1997, said it was not an easy decision but ultimately he felt it was the right time to go.

"It was not an easy decision to make given that it has been a great privilege and honour representing my country during the past 18 years," Jayawardene said in a letter to Sri Lanka Cricket.

"But I believe this is the right time (to go)."

Jayawardene, a member of the Sri Lankan team which achieved last month's surprise 1-0 Test win in England, has played 145 Tests and averages just over 50 with 33 centuries.

The right-hander retired from Twenty20 internationals this April but will still be available for one-day international cricket.

"He wants to give up Test cricket so that he can concentrate on one-day matches. He wants to be fully prepared for the next World Cup," Jayasuriya told AFP.

"We respect his decision."

Jayawardene is expected to play in the series against Pakistan at home starting on August 14.

He has been in fine form recently, scoring an unbeaten double-century against Bangladesh in the first Test in Dhaka in January.

He made 203 not out, his seventh double-century.

Jayasuriya, a former Sri Lanka skipper, discussed Jayawardene's retirement plans with Sri Lanka's cricket board before it released the retirement letter on Monday.

"By stepping down from the Test squad he is also making way for a younger player to come in. We thank him for all he has done for cricket in the country," Jayasuriya said.

Jayawardene is expected to receive a standing ovation when he takes to the ground in the southern city of Galle on Wednesday for the first Test against South Africa.

We live in a world where facts and fiction get blurred
In times of uncertainty you need journalism you can trust. For only R75 per month, you have access to a world of in-depth analyses, investigative journalism, top opinions and a range of features. Journalism strengthens democracy. Invest in the future today.
Subscribe to News24
Related Links
No flag on cricket emblem!?
Senanayake sent for coaching
Next on Sport24
Domingo lifts Proteas' bar

Choose your newsletters
Voting Booth
What are your views on the World Rugby men's Player of the Year nominations for 2021 not including any Springboks?
Please select an option Oops! Something went wrong, please try again later.
It's a disgrace! Both Siya Kolisi AND Eben Etzebeth should have been nominated!
39% - 6440 votes
Siya, at the very least, should have been included after a superb season
6% - 1020 votes
Etzebeth has been SA's best player this year and should feel hard done by
21% - 3499 votes
Get over it! Moaning about this just sounds like sour grapes!
33% - 5491 votes
Previous Results
Showmax
The story of a legend: Sir Alex Ferguson