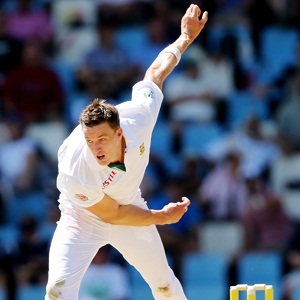 Johannesburg - In Test cricket, Morné Morkel is one of the “best support bowlers I have seen,” said Robin Jackman, a former England Test bowler and also an astute analyst of international cricket for www.supersport.com.

According to the supersport.com website, Jackman was approached for his comment after Morkel finished with a match-haul of seven for 78 and was the perfect foil for Dale Steyn, who captured nine for 99 in the first Test at Galle to set up an emphatic 153-run win for South Africa against Sri Lanka.

“Morkel seldom gets the kudo’s in terms of rewards. Dale Steyn is the Rolls Royce of good bowlers, but he still needs support from the other side. Morné provides the support that both Dale and Vernon (Philander) thrive on,” said Jackman.

“I will join the band of people who say that if Morné need to push his length half a yard closer to the bat to get more wickets. But in the meantime, he is doing a phenomenal job for his team as support bowler.

“There are also arguably more catches dropped of his bowling than any other bowler.

“He is one of the best support bowler I have seen,” added Jackman, a vastly experienced analyst who was one of the most underrated bowlers during a first-class career spanning sixteen years in which he took 1402 wickets.

Rob Walter, The Unlimited Titans coach, said Morkel was arguably South Africa best bowler on view in the first session on the fifth day on Sunday.

At one stage he bowled eighteen balls on the trot without producing a bad delivery.

It was relentless pressure. The way in which he set up the edge by Kumar Sangakkara was simply brilliant.

Unfortunately (from a SA point of view), the Sri Lankan left-handed master was dropped (on 65, but perished shortly afterwards for 76).

Walter said Morkel executed the short deliveries to the lower order batsman almost perfectly. “It was frightening,” he added.

Morkel only captured six wickets during a recent Test series against Australia and it prompted some commentators to question his length and also his so-called follow-up delivery after setting up batsmen with a series of bouncers.

The tall fast bowler responded with an almost perfect performance at Galle in the first Test and tested the Sri Lankan batsmen with his nagging accuracy, probing lines, and some wicked bouncers.

We live in a world where facts and fiction get blurred
In times of uncertainty you need journalism you can trust. For only R75 per month, you have access to a world of in-depth analyses, investigative journalism, top opinions and a range of features. Journalism strengthens democracy. Invest in the future today.
Subscribe to News24
Next on Sport24
Domingo lifts Proteas' bar

Choose your newsletters
Voting Booth
What are your views on the World Rugby men's Player of the Year nominations for 2021 not including any Springboks?
Please select an option Oops! Something went wrong, please try again later.
It's a disgrace! Both Siya Kolisi AND Eben Etzebeth should have been nominated!
39% - 6468 votes
Siya, at the very least, should have been included after a superb season
6% - 1022 votes
Etzebeth has been SA's best player this year and should feel hard done by
21% - 3515 votes
Get over it! Moaning about this just sounds like sour grapes!
33% - 5526 votes
Previous Results
Showmax
The story of a legend: Sir Alex Ferguson