No flag on cricket emblem!? 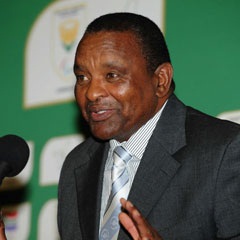 Sascoc president Gideon Sam told Beeld that the King Protea is the "only symbol for national sports teams" and "no other combination is allowed".

Sam said he doesn't care where the flag moves on the Proteas kit, as long as it moves.

"If they don't do it, then we'll act against them," said Sam.

According to Sascoc regulations, CSA could be kicked out as a federation, which would mean that the Proteas won't be allowed to compete internationally.

Sam said they have given CSA time until after the Proteas' current tour of Sri Lanka to sort the issue out.

The Proteas made history over the weekend when they won the ODI series 2-1 against the Sri Lankans - the first one-day series a South African team had ever won in that country.

The two-Test series starts in Galle on Wednesday. Get the newsletter
Voting Booth
What are your views on the World Rugby men's Player of the Year nominations for 2021 not including any Springboks?
Please select an option Oops! Something went wrong, please try again later.
It's a disgrace! Both Siya Kolisi AND Eben Etzebeth should have been nominated!
39% - 6501 votes
Siya, at the very least, should have been included after a superb season
6% - 1024 votes
Etzebeth has been SA's best player this year and should feel hard done by
21% - 3530 votes
Get over it! Moaning about this just sounds like sour grapes!
33% - 5549 votes
Previous Results
Showmax
The story of a legend: Sir Alex Ferguson