Colombo - Sri Lanka cricket board has complained to the sport's governing body about the poor air quality in which its players were compelled to play a Test in the Indian capital New Delhi.

Sports minister Dayasiri Jayasekara said Sri Lanka Cricket made the complaint on Tuesday to the International Cricket Council (ICC), saying "we can't play like this as four players had vomited" due to the pollution.

He said the ICC had informed them that it will take necessary steps.

However, it is not certain what action ICC had taken.

Sri Lanka's cricketers wore face masks during the match and the bowlers complained of shortness of breath.

The match ended in a draw, which gave India a 1-0 victory in their three-Test series.

We live in a world where facts and fiction get blurred
In times of uncertainty you need journalism you can trust. For only R75 per month, you have access to a world of in-depth analyses, investigative journalism, top opinions and a range of features. Journalism strengthens democracy. Invest in the future today.
Subscribe to News24
Related Links
England 'massively' still in Ashes fight - Root
Skipper Faf still a doubt for Boxing Day
Jimmy breaks jinx, Dale still stacks up better
Next on Sport24
'Don't retire': 'Universe Boss' Gayle still IPL force at 41 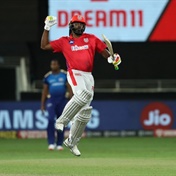