Dolphins down Knights to keep up perfect start to T20 Challenge 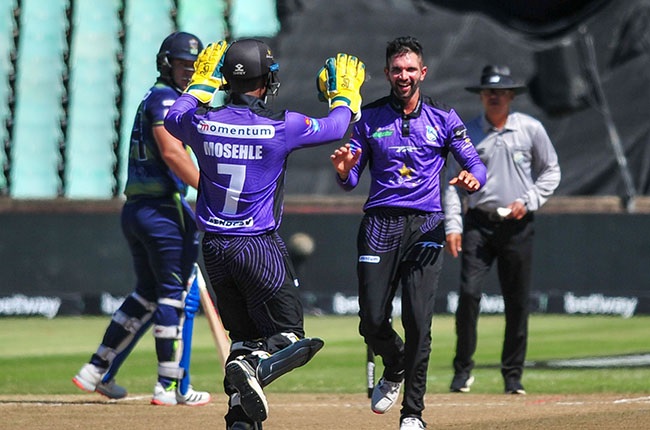 The Dolphins made it two wins from two in the CSA T20 Challenge on Saturday as they cruised past the Knights in Durban.

Robbie Frylinck starred with bat and ball in a comfortable four-wicket victory.

The veteran all-rounder first excelled with the ball by claiming 2/11 that helped his team restrict their opponents to 144/5 in their 20 overs.

Frylinck then struck an important 24 off 15 balls following a nervy period for the local side, which ultimately ensured they got to their target with 11 deliveries to spare.

It was a result that propelled the coastal side to the top of the table, with the Central Franchise remaining winless after two games so far.

After winning the toss and batting, the Knights were in trouble from the get-go, losing their first four wickets inside the opening 6.3 overs.

Captain Keshav Maharaj (2/18), fresh from claiming a career-best four-for on day one of the competition, struck twice in the first three deliveries of the game to dismiss Patrick Kruger and Andries Gous both for ducks, with Frylinck then taking out Jacques Snyman (6) and Farhaan Behardien (5).

That made for a dreadful start for Allan Donald’s charges, but they only improved from there thanks to their own skipper Pite van Biljon as he recorded his seventh career half-century on his way to an unbeaten 72 off 54 balls (3 fours, 4 sixes).

Adams (2/26) did manage to break through in the sixth over by enticing an edge from the former, while Senuran Muthusamy (8) and the latter followed in quick succession.

But Khaya Zondo, who scored a half-century in the Dolphins’ win over the Cape Cobras on Saturday, hit an unbeaten 35, and together with David Miller (29), settled nerves.

Alfred Mothoa (2/37) gave the Knights hope by removing Miller and Mangaliso Mosehle (1), but Frylinck and Zondo put on 55 for the sixth wicket to take their side to a solid win.

We live in a world where facts and fiction get blurred
In times of uncertainty you need journalism you can trust. For only R75 per month, you have access to a world of in-depth analyses, investigative journalism, top opinions and a range of features. Journalism strengthens democracy. Invest in the future today.
Subscribe to News24
Related Links
Pakistan Super League hit by Covid infection
Rassie van der Dussen, Kagiso Rabada guide Lions to win over Warriors
India's Virat Kohli says he suffered from depression
Next on Sport24
STATS | 4 standout performances from Kingsmead's T20 Challenge