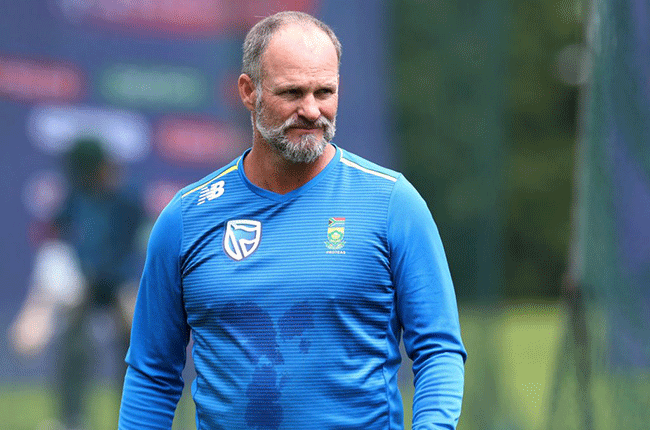 Sport24 asked: How would you sum up your tenure as a Proteas coach?

Dale Benkenstein: We had some really good highs and fairly poor performances as well, but that’s sport. I’m not a social media-user so it wasn’t that hard for me (to disengage) when criticism was directed towards me for our batting displays. That said, criticism from the public and media is part of the territory. You don’t get all the perks that come with being a Proteas assistant coach without having to handle what other people say. It’s important to know where it comes from. My values are about how hard I’m working. I would ask myself: “Am I doing what I need to or am I being lazy?” If you’re due that criticism then it’s good because you need to lift your game. But, as a coaching team, we worked incredibly hard. It’s tough being a batting coach because everyone these days thinks they are a batsman. I worked with everyone in the squad and to get it all right is almost impossible. It’s about giving the players what they need in order to get them out there. From my point of view, they then have to play their role as well. When batsmen do well, it’s them and when they do badly, it’s the batting coach. But that’s fine because when a game starts the coaching staff put their feet up, have a coffee and take a watching brief and it’s the players who have to deal with all of the pressure.

Sport24 asked: Which player did you find most challenging to work with?

Dale Benkenstein: Quinny (Quinton de Kock) was a tough one for me in the beginning. From a cricketing point of view, he was probably my favourite batsman to watch. I loved the way he played but, when I joined the Proteas coaching set-up, I was briefed that he doesn’t have much time for coaches. I let him know that I would give him all the information that I would deliver to the other batters. If he wanted to use it, he could and if he didn’t, that was also fine but I was going to do my job. He is the type of person that does whatever feels right to him. (De Kock withdrew from South Africa’s World Cup match against the West Indies after Cricket South Africa ordered the players to take the knee). At the start of our working relationship, I don’t think he was in a great place (mentally) but after a bit of time off, his attitude changed for the better. Slowly he started asking questions, began getting throws from me and hitting balls between innings. It shows you can have all the talent in the world but if you don’t put that together with the right attitude and work ethic you can struggle. Quinny turned a corner, became much fitter and bought into trying to be the best.

Sport24 asked: Your assessment of the Proteas side doing duty in the UAE?

Dale Benkenstein: There is no doubt that the team would be stronger with the likes of Faf du Plessis, AB de Villiers and Imran Tahir in the mix. I’m not sure what AB’s availability was like but I know that Faf and Imran were available for selection. I find it hard to understand why you would want to leave those guys out. But when you’ve got your finger on the pulse and are working with the players day-in and day-out, I guess you have a feel for what you want. However from the outside, it’s always the world-class players who stand up and win tournaments. As such, you surely want to have those world-class players in your team. That said, the team is there now and we have to make the most of what we’ve got. Quinton is the absolute superstar at the top of the order, Rassie van der Dussen is in good form and David Miller has won many games under pressure against top sides in the world. From a batting point of view, it’s those three plus I really like Aiden Markram. He hasn’t proved it enough in the white-ball game, but I don’t think he’s been afforded enough opportunities. I feel he’s an absolute world-class player in all formats. This is a great tournament for him to really cement himself as a T20 player. Those are the big guns that need to fire with the bat. Meanwhile, our strength in South African cricket has always been our bowling. We boast good paceman in the form of Kagiso Rabada and Anrich Nortje and have the quality of spinner Tabraiz Shamsi, who is the top-ranked T20 bowler in the world. The Proteas are relying on their bowlers to set the platform and, if they are not chasing targets which are out of reach, they can win games with the bat as well. The Proteas are the underdogs, which is a good place to be and it’s about peaking at the right time. The tough thing about T20 though is that you can be neck-a-neck with a team and then one ball here or there and the next minute you’re either a hero or don’t get over the line. Hopefully the boys will be able to play those important balls well when it counts. (The Proteas next face Sri Lanka on Saturday).

Sport24 asked: Your take on the Boucher/Bavuma leadership combination?

Dale Benkenstein: For some or other reason there is always controversy within South African cricket. But I believe you can’t deny someone like Boucher as head coach – cricket has been his life. He has heaps of experience and is one of the most competitive men I’ve ever met.  I think he has done a pretty good job. In terms of Bavuma, many wouldn’t have put him down as a T20 specialist, but he led the team very well in the West Indies. The players seem to be playing for him and that’s ultimately what you need. Bavuma doesn’t boast a wealth of experience, but T20 cricket is one format in which a lot of planning can be done prior to the game. Good captaincy is about team work and collective buy-in. Temba is good like that and he will call on his senior players and coaching staff. He’s quite an intelligent man (as evidenced by his press conferences) and isn’t a dictator. During my time as captain that worked for me as well rather than a ‘my way or the highway’ type of approach.

Sport24 asked: What have you made of the evolution of Twenty20 cricket?

Dale Benkenstein: It’s been an absolute revelation for the game. T20 cricket is what people want to watch because it’s very exciting and showcases amazing talent. It adds value to the other formats through fielding and new skill-sets – players are now reverse-sweeping in Test cricket. I understand T20’s place in the grander scheme of world cricket but I still feel Test cricket is really where you see the true cricketers. As a cricket purist, the former is not my favourite format. My advice to any young cricketers is: “You definitely want to set your sights on being a Test cricketer because it lays the foundation for any format.” I love the hardness, patience and all the other great attributes that Test cricket brings. For me, it’s still the purest form of the game. I’ve heard that mandatory four-day Tests are likely to come into effect from 2023. Most Test matches today are finishing in four days or less but it’s nice to have that fifth day because it allows for incredible draws or fantastic day five finishes.

Dale Benkenstein: Looking around now, and seeing how many opportunities cricketers get and the ‘quality’ of players that they are, I do sometimes feel a bit hard done by. The worst thing for me was not playing a Test match for my country. I probably matured a bit later, which in the end counted against me. I played when I was quite young but I definitely felt, after playing a few years in England and towards the end of my Dolphins career from the age of 28 to 30, I was probably playing the best cricket of my career. However, in South Africa in those days once you played and hadn’t performed then the selectors never recalled you. On account of my first-class record, (Benkenstein scored over 16 000 runs) I would have liked to have played a Test or two but that’s life and you have to move on.

Sport24 asked: Who do you regard as the top three batsmen of all time?

Dale Benkenstein: Jacques Kallis would without a doubt be my number one. I was lucky enough to have played with and captained him when he was a youngster. As he matured, he could adjust his game to whatever he wanted. At the end of the day, the best cricketers in the world are judged on performance and he performed. He also very seldom got injured. I believe he’s underrated as the greatest of all time because he is South African. For me, he is definitely the best cricketer that has ever walked the earth.  Brian Lara was also a world-class batsman. He was a standout batter and was a joy to watch. He always put pressure on the bowlers and his run-scoring spoke for itself. My final selection may be left field but Steve Waugh was a hero of mine. Kallis and Lara were probably more talented than Waugh but, owing to his grit and never-say-die attitude, he was someone I really admired. He may not be up there in the record books with the rest in terms of runs, but I followed his career as a cricketer, tried to find out what made him tick and applied certain points to my game.

Deon Carstens
We live in a world where facts and fiction get blurred
In times of uncertainty you need journalism you can trust. For 14 free days, you can have access to a world of in-depth analyses, investigative journalism, top opinions and a range of features. Journalism strengthens democracy. Invest in the future today. Thereafter you will be billed R75 per month. You can cancel anytime and if you cancel within 14 days you won't be billed.
Subscribe to News24
Next on Sport24
Klusener on quirks of coaching Afghans: 'They learn the game on tape ball, street cricket'