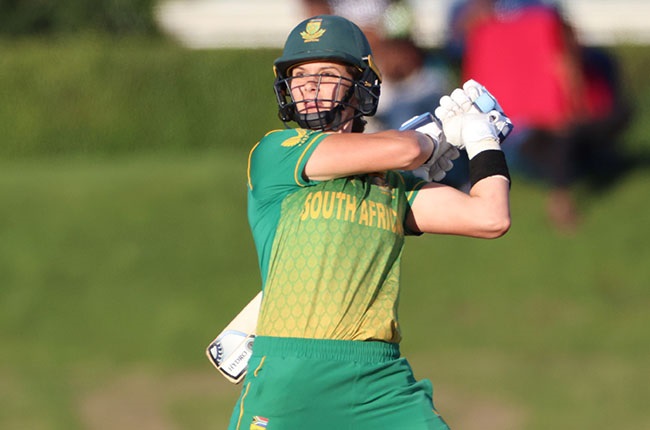 The Proteas completed the group stages of their 2022 World Cup campaign with an incredible three-wicket, final-ball victory over India at the Hagley Oval in Christchurch on Sunday.

They had already secured second position on the log going into the match, however, and they will now meet a resurgent England in the semi-finals - also in Christchurch - on Thursday.

Australia and West Indies will meet in the other semi-final.

It was a superbly executed batting performance from the Proteas and the second-highest score ever chased down at a Women's World Cup (and South Africa's record high), and while it does not influence their position on the log, this is exactly the injection of confidence they needed heading into the business end of the competition.

Laura Wolvaardt's 80 off 79 was immense, while former captain Mignon du Preez (55* off 63) provided the composure needed to see her side home when tensions were high.

There was drama in the final over when Du Preez thought she was out, only for replays to reveal that spinner Deepti Sharma had bowled a no-ball.

The Proteas bowlers struggled to control proceedings, though they did restrict India's momentum in the middle overs and the score could have been a lot more.

Shabnim Ismail (2/42) and the returning Masabata Klaas (2/38) were the pick of the bowlers.

South Africa's run chase, once again, was based around the impressive Wolvaardt.

The 22-year-old was superb once more, scoring her fifth half-century in seven outings at this World Cup as she became the highest run scorer of the tournament so far with 433 runs at an average of 61.85.

Her cover drives are always a highlight, but Wolvaardt has evolved her game so that she scores all around the ground, and her 125-run partnership with Lara Goodall (49 off 69) for the second wicket looked to be taking the Proteas home.

India, though, were desperate in the knowledge that only a win would see them progress to the playoffs, and it was Harmanpreet who made the difference when she had Wolvaardt bowled for a near-flawless effort.

That followed Goodall being stumped off Rajeshwari Gayakwad, and all of a sudden the Proteas had fallen to 145/3 with the run rate climbing as a result of two new batters being at the wicket.

Skipper Sune Luus (22 off 27) and Du Preez kept things ticking, but Luus was out LBW to Harmanpreet, who was having a big day.

With Marizanne Kapp entering the fray, however, the Proteas were always in the game as long as she was at the crease and going into the last 10 overs, they needed 77 with five wickets left and the contest evenly poised.

When Du Preez ran Kapp out in the 45th over, it looked like India had taken control, but South Africa's former captain kept fighting and Chloe Tryon (17 off 9) played a crucial little cameo to swing the momentum back her side's way.

When she was out caught and bowled to Gayakwad, the Proteas needed 20 off 18 with four wickets left and would have backed themselves from there with Du Preez well set.

South Africa needed seven off the last over, but there was more drama when Trisha Chetty (7 off 7) was run out and, with three needed from just two, a moment of madness from Du Preez then saw her pick out the fielder at long-on.

In the most dramatic development, Du Preez was then brought back to the middle when replays revealed that Deepti Sharma had overstepped.

Du Preez needed one off the last ball, and she danced down the wicket to dispatch the ball for a boundary.