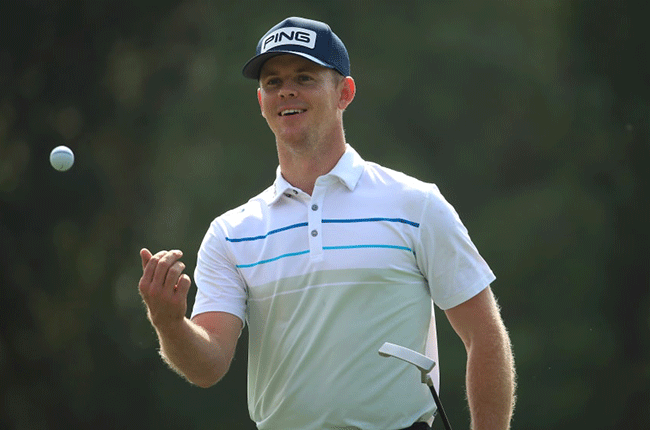 Denmark's Joachim B. Hansen fired a seven-under-par 65 to take the lead after the first day of the Dubai Desert Classic on Thursday, while Collin Morikawa, Sergio Garcia and Viktor Hovland all made good starts.

Brandon Stone was the best placed of the South African contingent after he fired a 69.

World number 110 Hansen carded a bogey-free opening round to lead on seven-under, one shot clear of South African Justin Harding, who still has one hole to complete after play was suspended.

Hansen continued the good form he showed in the United Arab Emirates at the end of last season -- he won the Dubai Championship in November before a top-10 finish at the World Tour Championship.

"A bit of a shame there wasn't any more tournaments at the end of last year I but try to keep it going," he told europeantour.com.

To claim a third Tour win, Hansen will have to hold off a strong chasing pack, with Garcia and Tommy Fleetwood among a five-strong group in the clubhouse at five-under.

Garcia avoided any dropped shots, while Fleetwood birdied the 18th to join his Ryder Cup teammate in signing for a 67.

"I still have a lot of things I want to achieve," said former Masters champion Garcia. "I want to get better, keep challenging myself to improve.

"It's never easy, and obviously as you get older, it's tougher."

Spain's Pablo Larrazabal, Italy's Andrea Pavan and 52-year-old Thai Thongchai Jaidee are the other players just two strokes off the lead after 18 holes.

World number two Morikawa is lurking menacingly at four-under as he bounced back from a disappointing performance when he finished tied-62nd in Abu Dhabi last week.

The British Open champion flew out of the blocks with a six-under 31 on the back nine, his first nine holes, before stumbling to post a 68.

"I'm trying to not worry about too much and just show up on the golf course, play golf and just know where my misses will be and I think that's the biggest thing," said Morikawa, last year's Race to Dubai winner.

It was a slow day for Rory McIlroy, though, as the four-time major champion had to settle for a one-under 71.

Note: First round to be completed on Friday

We live in a world where facts and fiction get blurred
In times of uncertainty you need journalism you can trust. For 14 free days, you can have access to a world of in-depth analyses, investigative journalism, top opinions and a range of features. Journalism strengthens democracy. Invest in the future today. Thereafter you will be billed R75 per month. You can cancel anytime and if you cancel within 14 days you won't be billed.
Subscribe to News24
Next on Sport24
DP World Tour | Wallace tied for lead at Dutch Open as Gouveia falters

Get the newsletter
Voting Booth
Would you be keen to see the Springboks join the Six Nations?
Please select an option Oops! Something went wrong, please try again later.
Yes! The Northern Hemisphere is the future.
52% - 2565 votes
No! The Rugby Championship is still the pinnacle.
48% - 2323 votes
Previous Results
Showmax
The story of a legend: Sir Alex Ferguson