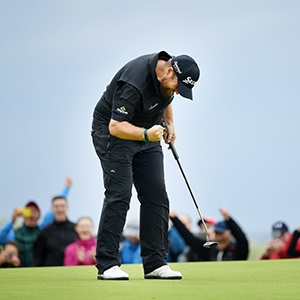 The Guinness-loving Irishman ended up with a massive hangover after several nights of partying in the aftermath of him lifting the Claret Jug at Royal Portrush in July.

But now the 32-year-old has pledged a self-imposed booze ban for this week at St Andrews, Carnoustie and Kingsbarns.

"I'm taking it seriously and while I may well go down to the Jigger Inn for a drink with the lads, it'll only be Diet Coke."

Lowry tees off in Thursday's first round on Carnoustie's 10th hole in the company of South Africa's Justin Harding whose partner in the separate pro-am competition is Vinnie Jones, the renowned tough guy footballer who turned to acting when his career ended, often playing violent roles.

We live in a world where facts and fiction get blurred
In times of uncertainty you need journalism you can trust. For only R75 per month, you have access to a world of in-depth analyses, investigative journalism, top opinions and a range of features. Journalism strengthens democracy. Invest in the future today.
Subscribe to News24
Related Links
Aiken going through 'hell'
Sharks rugby star resets on golf course
PGA Tour cancels Hong Kong event over player safety
Next on Sport24
Gary Player hails Bezuidenhout on Leopard Creek win: 'The future of SA golf is bright'