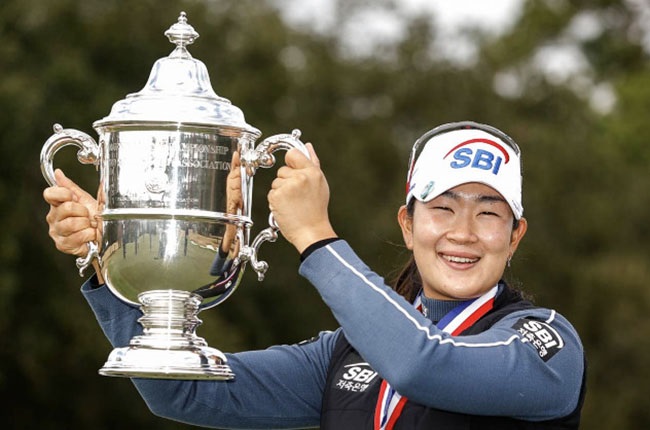 The last major winner of the year, a veteran's European triumph and an 11-year-old feature in golf talking points this week:

In this coronavirus-ravaged sporting year, it was somehow fitting that golf's final major champion of 2020 holed the winning putt wearing a mask as well as, we assume, a smile.

That everyone watching could see Kim A-lim's eyes light up after a remarkable run of three straight birdies to win the US Women's Open was just as well because the rest of her face was covered, as it had been all week.

While golfers in masks have become a familiar sight on the Korean LPGA Tour, where the 25-year-old plies her trade, it was a more arresting image in the bio-secure 'bubble' of a major, where most players choose not to don face coverings.

Kim, in her maiden appearance in a US Open, explained afterwards that she just wanted to protect herself and others.

"I'm kind of used to it," Kim told reporters through an interpreter.

"I'm OK to get positive tests for Covid-19, but I don't want to affect other people, players, a caddie that's playing within the group, so that's the reason I wear the mask throughout the round."

Most of the few players who did wear masks were from Asia, including fellow Korean and defending champion, Jeongeun Lee6.

Kim did remove her mask for pictures with the trophy, finally revealing the beaming grin that everyone wanted to see from a first-time major champion.

After Lee Westwood rolled back the years to win the Race to Dubai on Sunday, two decades on from first being crowned the European Tour's number one, the 47-year-old set his sights making the Ryder Cup team for an 11th time.

Being able to defy a creaking back, lack of practice and a Covid-affected season have all whetted the appetite of the popular Westwood for another crack at the Americans as part of Padraig Harrington's European team at Whistling Straits in September.

Westwood was a vice-captain to Thomas Bjorn in France in 2018 but it was clear -- after finishing runner-up to Matt Fitzpatrick at the DP World Tour Championship to win his third European crown -- that he wants to be back inside the ropes next year.

"I'd love to play the Ryder Cup again obviously," said Westwood, who is still a regular winner on tour and continues to feature near the top of the leaderboard in majors.

"It beats watching. There's obviously a lot less pressure watching the lads being vice-captain," said Westwood, who won the Abu Dhabi Championship against a world-class international field in January, finished 13th in this year's US Open and tied fourth in last year's British Open.

"I can still turn up to the biggest tournaments and compete as I proved at the start of the year in Abu Dhabi and at the US Open, where I bogeyed the last two holes and if I hadn't, I'd have finished fifth.

"If I qualify for the team, then I'm clearly good enough, and that's the way I'm going to play it."

Charlie Woods may only be 11 years old, but according to world number three Justin Thomas he's as good as his illustrious father, Tiger, when it comes to trash talking on the course.

Justin and his father will lock horns with Tiger and son at this weekend's PNC Championship over 36 holes in Florida, where top pros team up with a family member.

Thomas predicted there would be plenty of banter, with little Charlie dishing it out just like his dad.

"For some reason, Charlie just always wants to beat me," Thomas, who is a great friend of Tiger and his family, told ESPN at the recent Mayakoba Classic.

"It doesn't matter what it is. Although he's never beaten me in golf or a putting contest, he still talks trash just like his dad.

"We'll have that, like, inner tournament within a tournament, try to shut his little mouth up, but it will be fun," Thomas said.

Woods senior confirmed to Golf Digest that his son liked to put the verbal boot in, dubbing him "a little on the chirpy side, just like I am".

We live in a world where facts and fiction get blurred
In times of uncertainty you need journalism you can trust. For only R75 per month, you have access to a world of in-depth analyses, investigative journalism, top opinions and a range of features. Journalism strengthens democracy. Invest in the future today.
Subscribe to News24
Related Links
Kim A-Lim storms to US Women's Open crown
Amy Olson's major title bid hit by family tragedy
Americans English and Kuchar romp to 3rd Shootout crown
Next on Sport24
Scott Jamieson keeps nose ahead in Abu Dhabi

Choose your newsletters
Voting Booth
What are your views on the World Rugby men's Player of the Year nominations for 2021 not including any Springboks?
Please select an option Oops! Something went wrong, please try again later.
It's a disgrace! Both Siya Kolisi AND Eben Etzebeth should have been nominated!
39% - 6466 votes
Siya, at the very least, should have been included after a superb season
6% - 1022 votes
Etzebeth has been SA's best player this year and should feel hard done by
21% - 3514 votes
Get over it! Moaning about this just sounds like sour grapes!
33% - 5522 votes
Previous Results
Showmax
The story of a legend: Sir Alex Ferguson