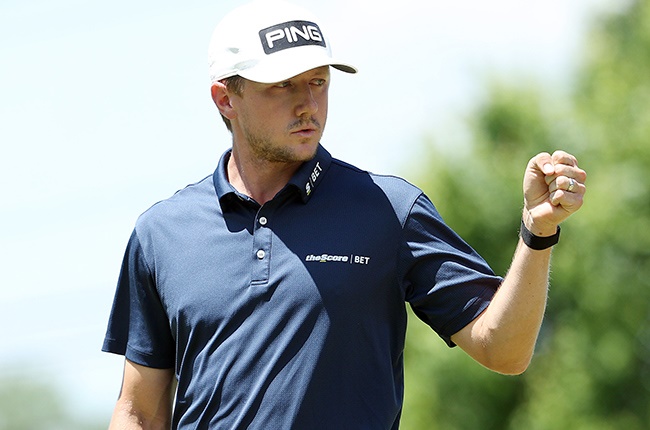 Mackenzie Hughes lit up TPC River Highlands in Connecticut on Thursday, firing 10 birdies in a 10-under-par 60 to seize a three-shot lead in the PGA Tour Travelers Championship.

The 29-year-old Canadian's career-low round was the lowest in tournament history.

He came up short on a 40-foot birdie attempt at his final hole to miss out on a 59, but had a comfortable lead over world number one Rory McIlroy, Xander Schauffele and Viktor Hovland, who shared second on seven-under-par 63.

"It was pretty fun," Hughes said. "The hole starts to look pretty big. You're just thinking about making birdies. Unfortunately I came up one short, but I beat my career best so that made me feel pretty good."

Hughes shined over the same Cromwell, Connecticut, layout where American Jim Furyk fired a US PGA record 12-under 58 in the 2016 final round.

Four-time major champion McIlroy of Northern Ireland had six birdies and an eagle against a lone bogey to make it first in the clubhouse on seven-under.

Schauffele and Hovland followed suit in the afternoon, Schauffele reaching eight-under through 15 before a bogey at the 17th dropped him back.

Hughes teed off on 10 and launched his birdie binge with a 30-footer from the fringe at 11. He birdied five straight to close the back side.

"It was a slow build," said Hughes, who rolled in a 31-foot birdie putt at 18. "I just convinced myself to keep the pedal down and keep making birdies."

He followed a birdie at the second hole with three birdies in a row starting at the par-five sixth to give himself a chance to crack 60, draining a dramatic 30-footer at the par-three eighth.

McIlroy also opened on the back nine and rolled in an 11-foot eagle putt at the 13th. He followed with birdies 14 and 15 before missing the green for a bogey at 16.

McIlroy birdied four of his last nine holes as well, and said he was not concerned about having a hot start despite the low scores typical at River Highlands.

"You get a little antsy and go a little quick if you start thinking that way," he said. "As much as it's low scores, you have to keep telling yourself to be patient."

Schauffele was three-under through four holes before a bogey at the seventh. He responded with four straight birdies from the eighth through the 11th -- dropping three 18-foot birdie putts and one 17-footer.

Schauffele said his decision not to attack the pins made his birdie run "kind of boring."

"The fun part was making the long putts," he said.

Norway's Hovland gained his share of second with a birdie at 18. The Norwegian had raced up the leaderboard with six straight threes on the back nine, a stretch that included a birdie at 12, an eagle at the par-five 13th and birdies at 14 and 15 -- bookended by pars at 11 and 16.

McIlroy playing partner Phil Mickelson, playing his first US PGA Tour event since turning 50 on June 16, headlined a group on 64.

The Travelers marks the third event since the tour returned earlier this month from a three-month hiatus due to the deadly coronavirus.

Two caddies and one player tested positive before the event prompting six player withdrawals, but McIlroy said there was no cause for alarm.

"I saw a couple of calls to shut the tournament down, which is silly from my point of view," McIlroy said. "As a whole it's been going really well."